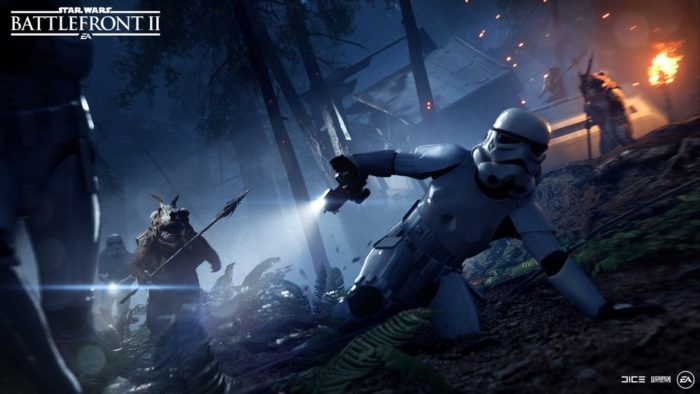 Ever fantasized about playing as one of the cuddly, teddy bear-like characters from Star Wars known as Ewoks? You’ll soon be able to, with a new mode coming to Star Wars Battlefront 2 as of April 18. Zip through the forests on Endor as you relive the clash between stormtroopers and the cuddly creatures in the new addition to the game, which you can start playing next week.

The new Ewok Hunt mode lets you fight as an Ewok who’s trying to save their adorable little village, or part of the Empire who’s trying to avoid being killed by the little buggers. The ambush finds Ewoks attacking stormtroopers with a variety of different weapons, and when stormtroopers are defeated, they’ll spawn as an Ewok. This continues until the entire Empire forces in-game have been eliminated from the game. But don’t think it’s going to be easy just because there are a ton of Ewoks out there or something.

Stormtroopers have heavy firepower, but Ewoks have their own assortment of arms like “Wisties,” or fairy-esque creatures first seen in the Caravan of Courage: An Ewok Adventure movie. You’ll get to look good while checking this mode out too, as there’ll be new Endor-themed cosmetic items up for grabs, such as Endor Han and Endor Leia. You can grab them with in-game credits or crystals, the microtransactions that will be readded to the game next week as well.

Deltarune’s Next 3 Chapters Will Be Released Together