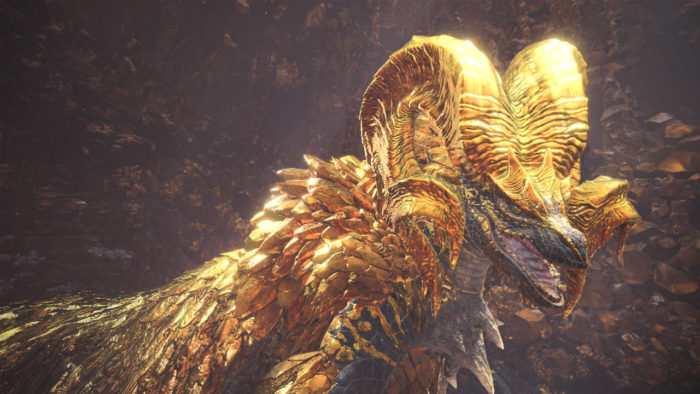 Not everything that glitters is gold. Sometimes, it’s a giant, angry, fire-breathing Elder Dragon that wants to eat you.

The Kulve Taroth is coming to Monster Hunter: World. If you’ve never heard of this shiny, gold-scaled creature, that’s because it was designed for Monster Hunter: World’s upcoming Siege missions. Sieges are, according to a recent blog post, special missions where up to sixteen hunters break off into groups of four and cooperate to fend off powerful monsters, not unlike raids in MMORPGs. Since the Kulve Taroth is exceptionally gigantic, players will apparently have to rely on cannons, makeshift avalanches, and other forms of heavy artillery to damage the creature. Furthermore, while hunters are encouraged to team up with friends, they can also join dedicated Kulve Taroth lobbies if they can’t form full sixteen-player groups.

As players attack the Kulve Taroth, they will chip away at its golden hide, which is actually made out of shiny weapon relics. The more players chip off, the more weapons they will collect. However, the types and stats of the weapons are completely random, so gamers might have to participate in several Kulve Taroth missions to find that one powerful Switch Axe or Long Sword. Players will also collect various Kulve Taroth materials that can be used to create shiny new armor sets.

While the trailer states the Kulve Taroth update will be available April 19th, it will actually be ready April 18th at 5pm PT. Sadly, players will only be able to participate in the Kulve Taroth Siege mission for a limited time, but the blog post promises it will return “at a later date,” which is good news for gamers still waiting for the PC version of Monster Hunter: World. With luck, Capcom will bring even more giant monsters for future Siege missions, such as the Jhen Mohran and the Dalamandur.