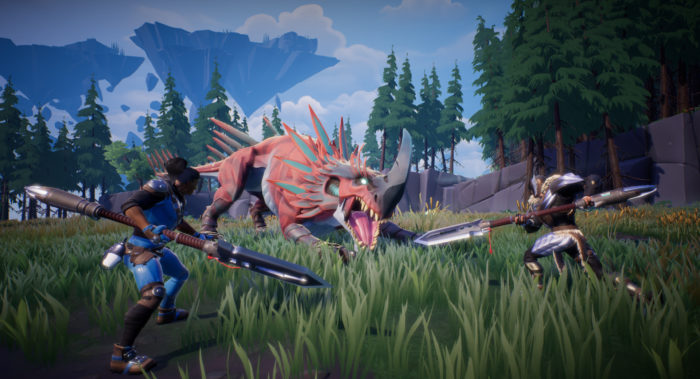 While the PC release of Monster Hunter: World is a long way off, the Monster Hunter-esque game Dauntless is charging full steam ahead and will release soon. In fact, its Open Beta is set to start next month.

Earlier today, Phoenix Labs revealed via press release that Dauntless’ Open Beta will start May 24th. Over 100,000 gamers participated in the (ongoing) Closed Beta, and 700,000 additional players have already signed up for the Open Beta, which demonstrates the popularity of this title.

As a Monster Hunter-esque game, fighting giant creatures called Behemoths is at the forefront of Dauntless, as is using their corpses to create better and badder weapons and armor sets. And then hunting even stronger Behemoths to craft even better weapons and armors in a never-ending cycle. We previewed Dauntless during its Closed Beta and enjoyed the game, especially as it hit all the necessary Monster Hunter notes while blazing its own path with rocket-powered hammers, laser spears, and fights that implement MMORPG raid mechanics and tactics.

You might wonder what’s the point of playing Dauntless if Monster Hunter: World already exists. The same reason gamers play Paladins: Champions of the Realm even though Overwatch is available: it’s free to play and is similar without being a clone. Plus, Phoenix Labs guarantees Dauntless will not include any paywalls, pay-to-win mechanics, or loot boxes. Of course, the game will include cash shop items, but that is just the nature of the beast when it comes to free-to-play games.

Gamers who want to help support the development of Dauntless can purchase Founder’s Packs, which include rewards such as special in-game titles, unique cosmetic items, cash shop currency, and Closed Beta access. Moreover, players who want to reserve their character name ahead of Open Beta can do so by signing up at www.playdauntless.com.

We look forward to the Open Beta of Dauntless. The game has come a long way since Phoenix Labs started development over four years ago, and we can’t wait to see the new additions and tweaks Open Beta brings.