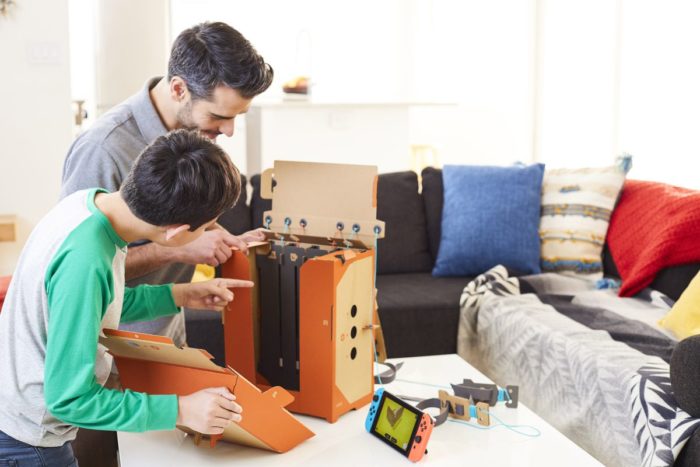 Nintendo Labo is finally here. After a lengthy wait to get our hands on the new Nintendo Switch exclusive product line, we can finally start building our own creations. It promises a fun time that’s appropriate for both children and adults, especially those interested in building their own “toys”for the Switch. But now that we can pick up a Labo kit for our own rather than just watching others’ video footage, it’s time to get down to brass tacks and figure out whether it’s actually worth picking up or not.

Nintendo Labo is essentially a toolkit for creatives and those who love to tinker. Its debut playsets include the Variety Kit for $69.99 and the Robot Kit for $79.99. You can also purchase the optional Customization Kit for $9.99, but it doesn’t include any additional projects. It’s full of items you can use the make the creations from both kits feel more like yours. Stickers, stencils, and tape rolls are available inside. There’s a lot to do, especially if it’s your first time delving into what the Labo is truly capable of. But given the admittedly steep price for both kits, is it worth buying one or both when you could spend a lot less on one of the newest game releases out there?

First, let’s consider what you get with both packages. The Variety Kit has enough product to let you create two Toy-Con RC cars: one fishing rod, one house, one motorbike, and one piano. The Robot Kit lets you create your own backpack and “robot” with a special visor to use with the character in-game. After spending time with both kits, I was able to determine just about how long it took to create all the toys included with each.

The Variety Kit ranged from about 20-30 minutes or so on the RC Cars to an hour or two with each product that scaled up, including the Toy-Con Piano, the most difficult project in the pack. It took the entire afternoon for me to assemble properly, though it’s the most time-intensive part of the package. As far as the Robot Kit goes, I spent the better part of a day getting it just right. Your mileage may vary, of course, but in terms of building these projects, you’ll want to spend a decent amount of time being precise with your building so everything comes out just right.

Then there’s the matter of actually playing with the creations you put together. Building your own projects is the most fun you’ll have with the Labo system, but seeing how it all ends up in a real, functional game is what makes it so unique and exciting. Their application, though, is ultimately limited, and that’s definitely something you should keep in mind before purchasing Labo. While some Adult players may have fun puttering about in a fishing game or using the piano, kids will likely be the ones who benefit most from finished products.

For those that want to avoid cluttering their homes with Labo creation, you’ll likely want to disassemble each item once you’re through with it. In my experience, you can put together and take apart the creations several times over before you start seeing any sort of wear and tear, but this is still cardboard we’re dealing with here, and it certainly isn’t as sturdy as perhaps ought to be for its price point. For those disciplined enough to take proper care of Labo, this won’t be too much of an issue. However, if you have kids, also known as machines of destruction, beware: you’ll want to factor in the cost of replacement kits.

Luckily, they’re available via Nintendo’s online storefront, with two printed sheets costing you about $3 and replacement packs running $14. But it may not always be cardboard that needs replacing. You may end up losing the various strings, rubber bands, grommets, or other components needed for various creations, and those cost money as well. You could potentially use your own cardboard in an attempt to make similar shapes, but it would be a lot easier biting the bullet and just purchasing extras if need be.

With all this in mind, is it worth picking up the Labo kits if you’re on a budget or not so sure it lives up to all the hype? It really depends on whether or not you’re enjoying it solo or with a family. If you’re playing solo and you’re interested in Nintendo’s latest wacky invention and want to give it a spin (with plenty of disposable income), then by all means go for it, but you may be feeling a little bit of a letdown by the experience after it’s time to disassemble everything and get it all shoved back into the (admittedly large) packaging. The Toy-Con Garage programming platform is a fun addition to play around with if you want to make your own Labo creations, but this will require some getting used to before you’re able to become a Labo virtuoso.

If you have a family and you’re looking for a fun way to get the kids rounded up and into a group activity that can teach them a thing or two about creating games and their “own” toys in general, the entry price is worth a few hours of fun on the weekend for each individual project. You’ll need to treat the components with kid gloves, as it were, and protect them for future uses, but it’s a good time that everyone will love, especially the younger set who usually just want to be a part of something fun that big brother, sister, or Mom and Dad are doing. The bottom line? Nintendo Labo is exceedingly cool, but it may not be the $70 or $80 plaything you want to drop some cash on just yet, depending on your home situation.