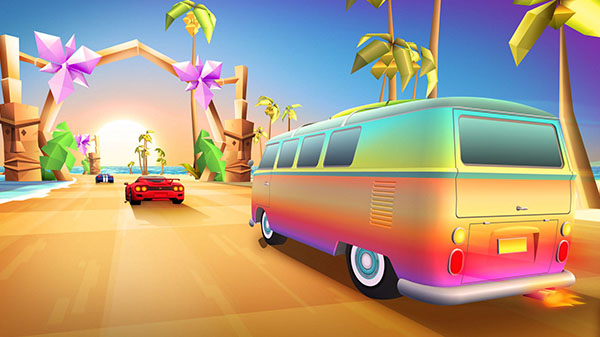 Horizon Chase Turbo is a colorful amalgam of 16-bit graphics and color aesthetics that looks like a world of fun. It’s headed to PlayStation 4, Xbox One, PC, and Switch this year, but all at different times — for instance, the PlayStation 4 version as well as the Steam version is launching on PC on May 15. The Xbox One and Switch versions have a ways to go still, with no concrete release date planned just yet.

The game is actually a new release of the original Horizon Chase World Tour, which originally released back in 2015. It’s back with additional features, newer graphics, a competitive mode, and more.

A tribute to classic arcade racers from the ’80s and ’90s, Horizon Chase Turbo combines the best of games like Outrun, Rush, and other popular titles to serve up races around the world, whether you’re zooming through rain, sleet, or snow (or even volcanoes and sandstorms.) It looks to recapture that same feeling of sliding into the driver’s seat at your favorite arcaded and putting the pedal to the metal and zooming away.

Beyond regular racing cups in World Tour mode, you can jump into the multiplayer split-screen mode to test your skills against friends via couch battle royal. This should likely work well with Switch players, especially since there’s a way to take the console on the go and enjoy races outside your home.