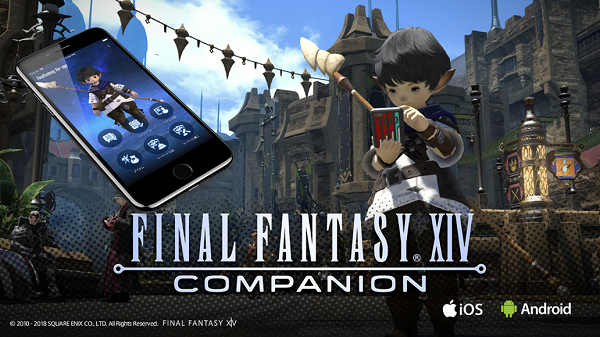 When Square Enix sent out its press release detailing the upcoming patch 4.3 and the continuation of the Stormblood MSQ, they also snuck a little announcement in there that might have been missed by fans. Final Fantasy XIV’s new mobile companion app is currently in development, and from what little we know of it so far, it might actually prove to be quite the valuable tool for those who live and breathe Eorzea even outside of the game.

The details are rather sparse at the moment, but what we do know is that the mobile app provides players with the ability to access certain in-game features when they’re away from their computer. Players can chat with Free Company members, organize events with the scheduler, and even register an extra favored Aetheryte destination. More importantly, players will also be able to organize their inventory and armoury chest, and even access the market board to buy and sell items. That is pretty huge.

Final Fantasy XIV veterans are more than aware of the fact that sorting out your inventory can be a huge pain. After you’ve sunk enough time into the game, you will eventually reach a point where your inventory is just full of materials you’re not sure what to do with, and an armoury chest filled with fashion gear you swear you’ll use for Glamours at some point in the future. But you never do. No one wants to spend their precious game time sorting through inventory slots, and allowing players to clean up their items in their spare time outside of the game is going to make things a lot more convenient. Thinking back to the vanilla Destiny days where players literally had to fly back to the Tower to grab some Exotic weapon they forgot to take out of the vault before they could do a raid, it’s almost a wonder why Bungie didn’t implement that mobile app sooner. Final Fantasy XIV looks to be taking a page out of Bungie’s book to introduce an app that actually offers a lot of utility outside of the game, and also allows players to be more efficient with their playing time.

But even that isn’t the biggest feature of the mobile app. As someone who’s gotten into crafting and gathering in Eorzea, the biggest highlight here is the ability to peruse the market board when you’re not in-game. Everyone who plays the market board knows that prices are always fluctuating. There’s always someone trying to undercut you, and just when you think you’ve got the market cornered on elm logs or ramie gear, someone swoops in and offers the same items for sale at a lower price. Being able to buy and sell items is going to be a blessing for crafters and gatherers because you’d basically be able to keep an eye on market prices and adjust your stock as necessary. No more logging back into the game after 24 hours only to find that you haven’t been able to sell anything because you were undercut overnight.

It’s also worth noting that Square Enix is planning on releasing a premium plan with the app, and premium features include being able to sort through retainer inventories, registering an additional retainer, and getting double saddlebag capacity. The drawback of not going premium is the inability to organize retainer stock, since that’s probably where most of your selling items are going to be. Even so, the standard plan should be enough for most people, as long as you have your stock stashed in your main inventory. It’s still sounds like a great convenience option for those who make their Gil off the market board, and it’s always nice being notified when you’ve made a big sale.

At the time of writing, the mobile app is still in development, and Square Enix hasn’t offered a solid release window or pricing details for the premium plan. Considering how much Final Fantasy XIV loves filling up the player’s inventory slots within the span of a few hours, this companion app can’t come soon enough, and I imagine lots of players will appreciate the convenience that it brings.