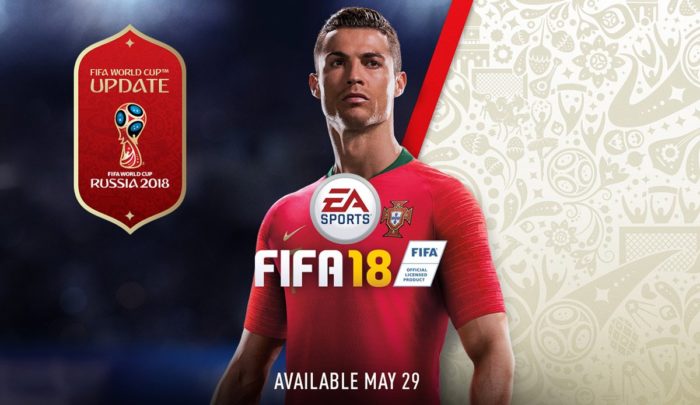 As many FIFA fans hoped, FIFA 18 will be celebrating the World Cup in Russia with a whole host of new content for all its modes.

Using authentic teams, kits, and stadiums, you can play through the World Cup with your favorite team. You can even “rewrite history by creating your own Custom FIFA World Cup Tournament.” You can determine the draw and even play as team that hasn’t qualified for the real-world tournament. The update will come to the game on May 29 and you can see the reveal trailer, starring Cristiano Ronaldo, below.

Get ready for 🇷🇺.

The FIFA #WorldCup update comes to #FIFA18 for free on May 29th! https://t.co/FmkXh2Mtcz pic.twitter.com/1dg57faJRi

“FIFA World Cup Ultimate Team has versions of Single Player Draft, Online Draft, and Squad Building Challenges, as well as Single Player and Online Tournament modes that let you play through realistic brackets with your squad.”

Players will also receive updated ratings for the mode, new Icons will be added, and the chemistry system will be tweaked to make creating a team easier. Finally, for every Standard or Premium pack you purchase in FIFA World Cup Ultimate Team, you will receive the equivalent gold pack in the standard Ultimate Team mode.

FIFA 18’s World Cup update will release on May 29.