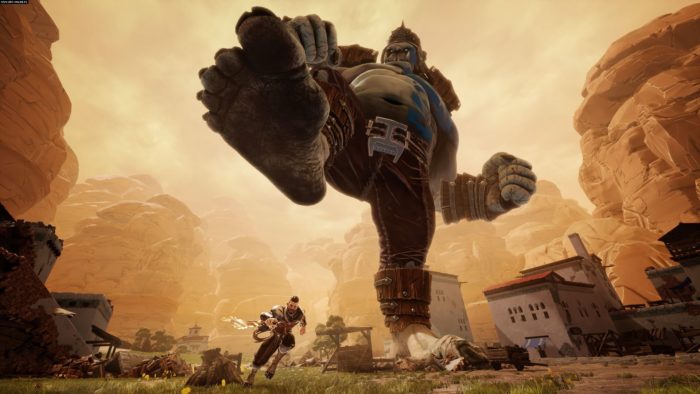 For a studio whose extensive portfolio comprises a mostly supporting role on big AAA projects, the opportunity to work on a project of its own volition must be an exciting one for Iron Galaxy – a chance to flex creative muscles and channel design experience into a single vision.

Extinction is the developer’s first game since the episodic fighting game, Killer Instinct, and on paper, it sounds like a collection of very good ideas. Fast combat, fluid traversal, enormous ogre-like enemies, and destructible environments. Sadly, though, Extinction remains just that: a collection of ideas that never really come together. Some are executed well, others leave a great deal to be desired. In the end, it’s a disappointing package that fails to stimulate the senses anywhere near as much as it sounds like it should.

Extinction is a game about a scourge of creatures known as the Ravenii who seek to wipe human existence from the planet. Once nothing more than fairy tales, these enormous 150-foot tall ogres are now spawning all over the kingdoms of the world and crushing entire cities. It’s up to the Sentinels to stop them — warriors of special power, few in number but the only ones with the necessary skill to take them down. The comparisons with Attack on Titan have been played down by Iron Galaxy, but they’ll be pretty obvious to anyone who’s familiar with the anime series: mammoth creatures attack walled cities, fended off by a collection of heroes who dash through the air and dismember them. Yeah, I’m not sure that I’m buying that Attack on Titan hasn’t majorly influenced the direction of Extinction.

Yet, actually comparing the two plotlines would likely be offensive to fans of the anime series, because in Extinction, the narrative and lore are so shockingly thin and underdeveloped that it barely gives you any reason to care about what’s going on. The plot really only exists to facilitate the gameplay loop and give it some minor semblance of context, with the events that tie together this six or so hour experience not at all satisfactorily fleshed out. Short, comic book-esque cutscenes appear on occasion, but the artwork isn’t impressive. Most of the story is moved along with storyboard style still frames, and the voice acting is generally pretty dicey.

Extinction is actually structured into segregated levels rather than one cohesive campaign experience. There are seven chapters, each containing four stages and each with their own sets of objectives to tick off. This gives the game a distinctly arcade-like, low stakes feel to proceedings. There’s nothing wrong with that per se, but when arguably the game’s biggest draw is the prospect of battling these intimidating monsters of epic scale, I had expected a more measured and intense build-up to their inevitable appearance. But after as little as a single stage of the opening chapter, the Ravenii ogres appear, and it then it quickly becomes apparent that they’re really just another enemy type. This is Extinction’s biggest problem: it never sells you on the size and threat of the impressive enemies that are supposed to make it such a thrill. They’re just too plentiful, too easy to fight, and completely unspectacular.

Extinction’s gameplay loop is only interesting for a few hours, and then it really does feel like a one trick pony. Each level you’ll arrive seconds before the Ravenii start smashing the city, and then you’re prompted to dash around saving its floundering citizens (who literally just stand there helplessly), killing smaller enemies and charging up your Rune meter. Once that’s full, it’s time to use your special attack to dismember the giant ogres walking around breaking the city apart. This typically requires you to break their armor first, and then run up their backs and perform an execution. There’s a percentage meter that ticks down as the city crumbles around you, which adds an element of time pressure to each encounter.

What bewildered me, in particular, was that for a developer with so much experience designing a nuanced fighting game, I didn’t feel any of that lineage in Extinction’s combat. All that’s required is a simple one button tap, and while there are combos, they’re hardly necessary or even exciting enough to warrant bothering with. As you progress through each level rescuing citizens, skill points are accumulated which can then be used to improve certain abilities, but these never felt like anything more than an obligatory inclusion to add surface level progression.

The worst part to combat, though, is that the process of killing the giant Ravenii ogres isn’t at all exciting or satisfying. The combos and standard attacks are only used versus the game’s smaller minion types, while executing Ravenii ogres is simply performed by pressing the heavy attack at an opportune moment. After chopping off a limb or two, you simply run up its back and press the same button to execute. The challenge is in breaking its armor while avoiding the beast’s swiping arms or stomping feet, but activating the heavy attack – which slows down time to allow you to land your hit – is irritatingly imprecise and downright boring to pull off. And since you’ll be doing this over and over again, there’s just no feeling of achievement at all.

Traversal is the other core pillar of Extinction’s gameplay, and here the game does a much better job of making it feel entertaining. You can swing between buildings, bounce on trees and certain rooftops, and there are upgrades to pour into, giving you the ability to string together longer flight times. Boosting through the air and challenging yourself to never to touch the ground as you race between enemies is fun enough. But in essence, once you’ve played a few hours of Extinction, you’ve seen virtually everything the game has to offer.

In the end, perhaps it isn’t so hard to imagine that a studio whose expertise is mostly technical consulting feels slightly void of inspiration and direction. Extinction has some fine enough ideas, but every aspect of its execution, from the narrative to the combat, feels generic and half-baked. Mimicking the whole giant-enemies-attack a-city loop is one thing, but failing so spectacularly to inject even a fraction of uniqueness into the equation is harder to comprehend. Nothing about Extinction feels like the AAA experience that it has been touted (and priced) as, and there’s nothing in the game to justify the recent CGI trailer that’s been designed to pique gamers’ interests. There are so many gaming experiences worth your time before you should even consider Extinction.