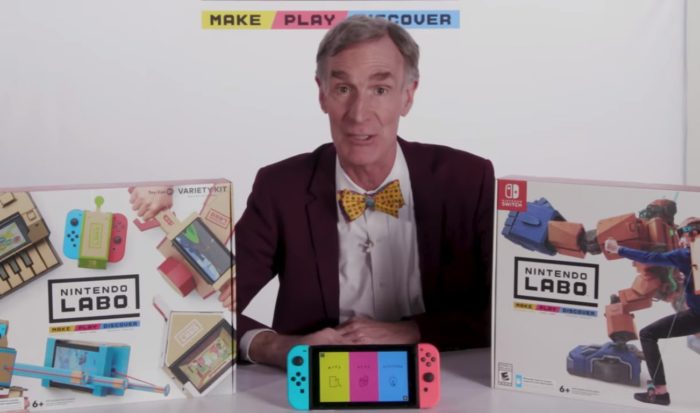 Nintendo’s newest peripheral is finally out with Nintendo Labo, and the curious cardboard accessories are certainly a sight to see. To celebrate the launch of Labo, Nintendo got none other than Bill Nye the Science Guy to play around with Labo.

If you happened to be hiding under a rock in the 90s, Bill Nye was the host of a popular children’s show that taught kids all about science. Hence the name “Bill Nye the Science Guy.” Most recently, however, Nye has had two seasons of a new show on Netflix, still science-focused, called Bill Nye Saves the World. The video, which you can see below, has Nye trying out all manner of Nintendo Labo contraptions, from fishing to building a miniature piano. As you’d expect, Nye approaches everything with his trademark enthusiasm. You can see the full video down below.

Nintendo Labo is now out worldwide, with two different packs available at the moment. You can get the Variety Kit for $69.99 which has a number of smaller activities like fishing, piano, and an RC drone. The other option is the Robot Kit for $79.99, which has you building a backpack that lets you control a giant robot on-screen.

Are you planning on picking up either of the Nintendo Labo kits, or are you still hesitant about it? Leave a comment down below and let us know.