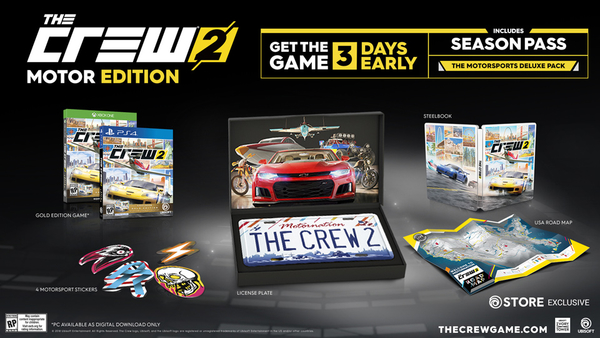 The Crew’s unique brand of open world racing is back with The Crew 2, scheduled for release this summer. It’s headed to PlayStation 4, Xbox One, and PC with cars, boats, motorcycles, planes and more for you to test drive in various offroad challenges, including street racing, freestyle, and pro racing. Basically, if you can race it, you can drive it in this follow-up to The Crew.

If you’re super excited to get behind the wheel, you can nab The Crew 2 Motor Edition, which lets you play the game three days early and access it before others on June 26, there days before its official debut on June 29. You’ll get a smattering of goodies including The Crew 2 Gold Edition, The Motorsports Deluxe Pack with in-game outfits and vehicles, a customized The Crew 2 license plate that you can use for plenty of cool stuff, four stickers, a Roadmap, and a steenbok case.

When the game releases, you can also take part in The Crew Rewards Program, which rounds up monthly challenges for you to unlock up to 19 different vehicles, including those that can be used in the water. You can sign up right now for the beta that’s coming soon on Xbox One, PlayStation 4, and PC now if you’re chomping at the bit to get your race on.

You can preorder the game now on both PlayStation 4 and PC and on Xbox One on March 16 at the Ubisoft store. You’ll get the Legendary Motors Pack, with a few different exclusive vehicles for your trouble.