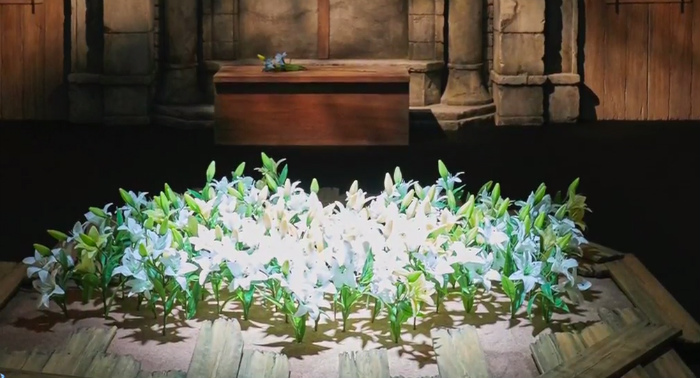 In celebration of 30 years of Final Fantasy, Square-Enix hosted a one-month exhibit called Memories of You in Tokyo, showcasing the scenes in which characters parted ways throughout the series. The temporary museum is now closed, having run from January 22 to February 28 of this year. However, thanks to GTV you can get a peek at what the event was like.

Instead of being an all-encompassing retrospective, Memories of You focused on some of the saddest scenes in the Final Fantasy franchise, as well as some of the endings. The theme was the parting of ways, and was an interactive exhibit that took patrons through a tour guide using a custom app.

Songs and voice lines from each game played through the app depending on the visitor’s location and synced with monitors showing scenes from various titles. The most prominent attraction was a recreation of Aerith’s Church in Sector 5. There, in the middle of the room, is the flower patch where Cloud first formally meets Aerith.

Of course, there was a gift shop and cafe at the museum as well. Tons of Final Fantasy merchandise was on sale, and Final Fantasy-themed food was up for grabs, like Elixirs and Mog ice cream.

It’s unfortunate the West never gets cool exhibits like this. There are some rabid fans of the series here (myself) included that would love to experience it. Maybe we’ll get a surprise sometime this year, but I’m not holding my breath.