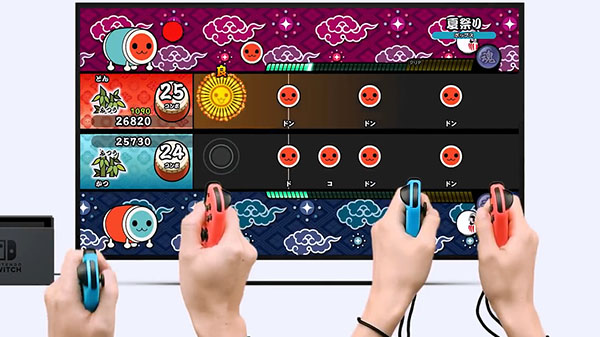 The Taiko Drum Master series is finally setting down on Switch, at least in Japan. Announced during the Japanese Nintendo Direct, which was a separate presentation from the American version. It’s planned for a summer launch in Japan, but there hasn’t been an announcement as far as American audiences go just yet, unfortunately.

Taiko Drum Master: Nintendo Switch Version (creative title!) will let players use the Joy-Con controllers as drumsticks with the HD Rumble feature. You’ll be able to play through songs from Splatoon 2, Super Mario Odyssey, and several other Nintendo titles.

The Nintendo Direct itself offered a bit of footage to show off the upcoming Taiko Drum Master title, and it looks like one of the most fun the series has seen in years. The last official console release for the somewhat niche series in North America was last on the PlayStation 2, complete with a Taiko drum and an eclectic selection of music. If you’ve ever played Donkey Konga, Taiko Drum Master is quite similar to the rhythm game, but you don’t need to hit bongo drums and have sticks to slap a big drum instead.

This is a unique series that deserves another chance at success in North America, so hopefully this is one Switch game we get another crack at when it releases in Japan. Besides, just look how cute and colorful it is! How could you say no to those faces?