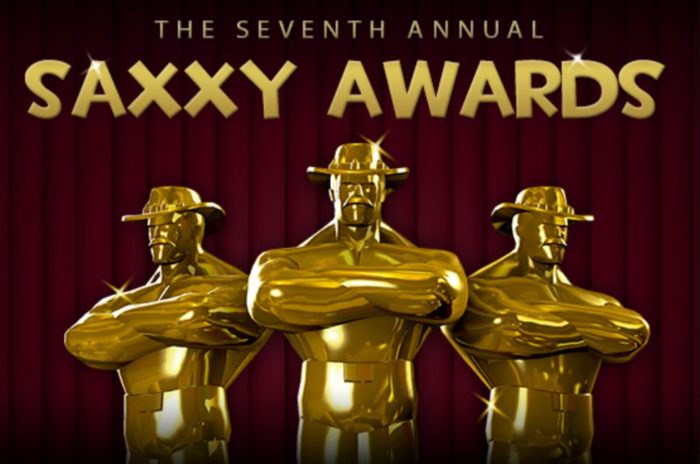 The winners of Valve’s Annual Saxxy Awards were announced on the Mar. 15, bringing some of the best animation and best comedy in short films for the year. Of the categories Action, Comedy, Drama, Short, and Extended, there were 20 finalists produced by veteran animators and newbies alike.

The Saxxy Awards are Valve’s way of rewarding the best animators using Valve’s in-house animation program for the source engine, Source FilmMaker. The contest has been going on since the program’s release in 2012, and has brought some amazing animations like the Lil’ Guardian Pyro, Animation vs. Animator, and The Timeless Thief. Those familiar with Source FilmMaker movies are aware most films made in the engine are centered around the Team Fortress 2 cast, which is why Valve awards each of its winners each year with an actual Saxxy statue… which is an in-game item for Team Fortress 2.

The overall winner, or rather winners, of the 7th annual Saxxy award was Agent Gunn: Vulkanite, made in collaberation by 20 people, including famous animators like A Hat In Time animator Cameron Turner and Source FilmMaker animator Caleb Caingcoy. Its pretty clear how many people put tons of work into this video, with crisp and polished animations. What really sets the animation apart is how different it is from traditional Source FilmMaker animations with its new setting and characters. On top of that, its hits every beat of a campy spy movie will throwing in well animated action and some classic Team Fortress humor. This was an award very well earned.

In the Action Category, first time animator Jig wins the Saxxy for his short film, Board Room. Jig’s animation is also the first ever short animation, as in an animation 1 minute or shorter, to win the Action category, so kudos. There’s some impressive slapstick comedy in this animation, one that’s a staple of Valve’s own animation of Team Fortress 2 characters, so this award is well deserved.

In the Comedy category, is the only non-Team Fortress related film, featuring… the Counter Strike chicken. The aptly named Chicken Strike took the Saxxy for this category, impressively beating Mountaineering Mercenaries and Emergency!, both of which were animated by 2016’s overall Saxxy award winning animator Winglet. It takes skill and a strong funny bone to beat veteran animators at the comedy game, which Chicken Strike definitely brings to the table.

In the Drama category, there’s no shame in crying. Baron and Mouseholiday’s film Legacy takes the Saxxy for making everyone cry over a 3 minute video. It helps a lot using the always emotional soundtrack Suns and Stars by Really Slow Motion, which many may know as that one really emotional song from the Battlefield 1 trailer.

In the shorts category, Hex SFM’s Player Portrait played with some fun tricks in perspective, earning the award for films in a minute and under. The concept for this short alone could pass for something Pixar made to play before one of its feature length films.

Finally, in the well coveted Extended category for videos up to 5 minutes long, is Leak. Just like other award winners, the film was made by a massive group of animators and model makers, like Kostamoinen and, you guessed it, Winglet again. This ones… a bit trippy. This also might need an epilepsy warning. Besides that its totally worth watching, and has a fun retro soundtrack worth listening to.

You can watch the rest of the nominees on Valve’s SourcefilmMaker website, and they’re all really worth giving a watch!

Did you feel like one of the animations got snubbed this year? Did your favorite not get nominated this year? Let us know in the comments down below!