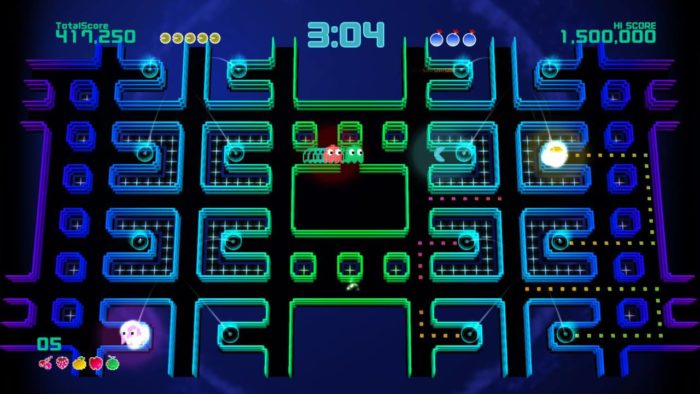 PAC-MAN CHAMPIONSHIP EDITION 2 PLUS ON SWITCH

Pac-Man is one of the longest running franchises in video game history, pre-dating the likes of Super Mario and The Legend of Zelda. Surprisingly though, there really aren’t many variations of the original Pac-Man arcade game. There’s Ms. Pac-Man, which is essentially the same game with a different maze, and then there’s Pac-Mania, which is a very similar game, but from an isometric view.

Let’s start off with the single-player first. Traversing 2D mazes, guzzling pac-dots, and eating ghosts all remains intact, but how you do these things has changed. In Pac-Man Championship Edition 2, your goal is to collect enough pac-dots in the maze to spawn a fruit. Eating the fruit will clear that maze, allowing you to quickly transition to the next maze and do it all again. You’d think you’d have to avoid the ghosts too, right? Wrong! Well, partially wrong. In this version of Pac-Man, you can bump into ghosts and actually push them out of your way without dying. Doing so will make them mad, which will then cause you to die if they touch you. Passing by mini-ghosts will add them to the rear end of one of the regular ghosts, creating a ghost train, which can be eaten for massive points. Another new feature is bomb jumping, which will instantly launch you to the center of the maze. If you’ve played any version of Pac-Man before, this may all sound pretty confusing. Thankfully, the game has an excellent tutorial system that takes you over all of the new rules and mechanics individually in bite-sized lessons. It only takes roughly 20 minutes to complete the tutorial, and it does a fantastic job of getting you to grips with this new way to play Pac-Man.

And what a great way to play Pac-Man it is. It’s fast, frantic, and best of all, fun.The action never stops, and you’ll have to be paying full attention to the screen in order to take the optimized path and earn the highest score. That being said, it’s not overly difficult. The fact that you can bump ghosts without dying adds a level of leniency that has been absent from past entries. But at the same time, mastering the levels can be incredibly challenging. In the Score Attack mode, the highest score you can achieve is an S-rank, and you better be playing damn near perfect to achieve that. If your goal is to get the highest score, this game has some great systems in place to help you every step of the way. Each of the 10 mazes has a Practice mode which starts you with 99 lives and 99 bombs. In this mode, you can take your time to memorize the optimal path. In addition, the highest spots on the leaderboard come with a replay that shows that person’s full run. So if you want to be like your heroes who sit atop the leaderboards, you can memorize the exact path that they take, and maybe tweak it a little to get an even higher score.

Along with Score Attack there is also an Adventure mode. In this mode, you tackle much shorter individual levels, where completing them on harder difficulties will earn you more stars. Your highest scores and fastest times aren’t tracked in this mode, making it a nice change of pace from the Score Attack mode. But it definitely isn’t less intense. Normal difficulty is fair and fun, but from the very first level, clearing the hard difficulty can be a great challenge. If you want to see the Adventure mode through to the final level, you’re going to have to collect every single star, so be prepared for some tough times.

The core gameplay of Pac-Man Championship Edition 2 is commendable for yet again changing up the formula of Pac-Man but still retaining the fun and not making it overly complicated. There is one element of the new style that sticks out to me as not quite being as fluid as the rest of the game, unfortunately, and that is the phase with the ghost trains. After eating the super pac-dot, the ghost trains will zip around a ghost line, where you have to cut them off from the front to eat them. The problem is that they move around so erratically that the ghost line, which should help you catch the ghost, isn’t as helpful as it should be, and you can end up being stuck on this phase a little too long, which kind of halts the flow of an otherwise fast-paced, continuous game. It’s not a massive issue or anything, but it is a little annoying, and can often end a great run in an Adventure mode level.

Next we have the new 2-player mode known as Pac-Man Championship Edition 2 Plus 2P (say that five times fast). I was pleasantly surprised when I tried this mode out to find that it is nothing like the single-player – it is completely its own unique thing. It only features local multiplayer, but if you don’t have someone to play with, there is an option to play solo with a computer controlling the second Pac-Man. Once all of the pac-dots have been cleared, both Pac-Mans (Pac-Men?) get a fruit that they have to smoosh together by colliding with each other in order to move on to the next maze. Instead of being able to bump ghosts out of the way, touching a ghost will get you captured. Your partner will have to come and break you free before you lose a life.

The coolest thing about this mode is the new final phase where you have to both take down a boss ghost. The maze’s confinement is torn down, allowing for more free movement, and even the ability to jump! Once you get ahold of the super-pac dot, you destroy the ghost by jumping and attacking it. It’s an excellent mode that really requires a high level of co-operation with your partner in order to succeed. They could have just made this mode the same as the single-player with another Pac-Man on screen, but they didn’t. Instead they’ve made one of the most enjoyable modes in Pac-Man history! The only complaint I have is that there is no Adventure mode for the multiplayer, only Score Attack. The latter is definitely the better mode between the two anyway, so it’s not a huge bother.

The whole of Pac-Man Championship Edition 2 has a very techno aestethic, from the visuals to the music, and you can custom tailor parts of the game how you like. At the start of every level, you are given the option to fully customize all of the visual and audio aspects. This includes the maze design, pac-dot color, background, designs of Pac-Man and the ghosts, and music. You can even change the camera for if you want the maze to look a bit more flat, or isometric like Pac-Mania. The techno vibe fits nicely with the fast nature of the gameplay, especially the music which does a great job of pumping you up. The soundtrack even features remixes of old Pac-Man songs, as well as other Namco arcade games, such as Dig Dug.

The only other negative about the game is something that didn’t affect me too much, and pertains to the game’s performance. I did notice a few dropped frames here and there when there was a lot of things going on on screen. However, this didn’t cause me to mess up my gameplay or anything, it was just a slight visual hiccup that I noticed. It happened so quickly that some people will probably never notice it. But there’s a chance that this may have an impact on a Pac-Man pro, I can’t really say.

Pac-Man Championship Edition 2 Plus is a great, unique Pac-Man game. Bandai Namco are have lately been surprsing with how far they can bend the Pac-Man formula without breaking it, and Pac-Man Championship Edition 2 Plus is another success of this. It’s worth picking up the game for the original version of Championship Edition 2 alone, but with the excellent new 2-player mode, the Switch version is far and away the best version to pick up. The 2-player mode is substantial enough that it feels like its own game. If you’ve already played the original to death on another console, I’d still recommend grabbing the Switch version. And if you haven’t played the original, you’re in for twice the treat.