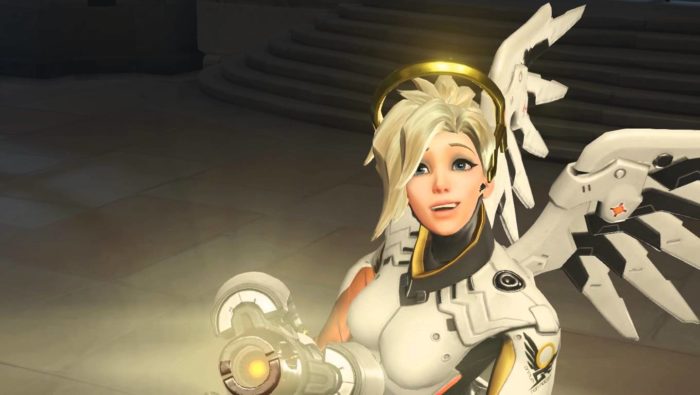 It was on Volskaya Industries when I finally snapped. The second point, in a tense game of Overwatch. I was playing Junkrat because nothing else was really working. After witnessing the other team finally coordinate a few ults and the end seemed inevitable, I reached over and turned off my computer in a hard ragequit.

If the Overwatch League is Major League Baseball, with accomplished non-pro Twitch streamers as Minor League Baseball, my skill level is around, oh, your local church rec league softball team. The last Competitive season was particularly brutal: my Overwatch buddies and myself kept getting on losing streaks for varying reasons, watching our Skill Rating (SR) in Competitive play dip lower and lower. For the past few months after that embarrassing ragequit that let down my friends and my team, I swore off the game. I wanted to like Overwatch, and I wanted to enjoy Overwatch, but banging my head into the Competitive playlist repeatedly wasn’t doing it.

But there’s a simple mistake that Overwatch players, myself included, fall into: only playing Competitive. Really, everybody who plays Overwatch should try more Quickplay, even the most competitive ones intent on ascending the SR ladder into the heavens. It will do wonders for your long-term enjoyment of the game.

You absolutely shouldn’t stop playing Competitive altogether. For one thing, The Competitive ruleset is probably the most fair, as it gives teams a chance to both defend and attack on a given map and games can be won in a variety of different ways. If you happen to be stronger at attacking than defending, you get an opportunity to do both, rather than being forced into either attack or defense for a Quickplay game.

But also, Competitive play is where the most serious play happens, and it’s where the joys of winning are the highest. Very few players partake in Competitive flippantly, and team compositions are almost always reasonable. It feels great to win a close Competitive game, playing in a team, and watching your SR climb.

But that’s a double-edged sword, because playing the Competitive playlist ties everything you do to your SR. If you win, your SR goes up. If you lose, your SR goes down. And, as explained below by Principal Designer Scott Mercer, individual play matters to how you gain and lose SR for the majority of players:

There is also another factor in determining the SR change after completing a match, and that’s a measurement of how well you personally performed during the match. If you perform well than you gain more SR when you win, and lose less SR when defeated. The reverse is also true, so if you perform very poorly you gain less SR for a win and lose additional SR when defeated. The personal performance adjustments have been controversial amongst the community for quite some time, especially since the calculations for these adjustments are not at all transparent.

Blizzard removed the personal adjustments for Diamond ranked players and above for the last two Competitive seasons, so if you’ve earned that position, you can breathe a little bit easier. But those personal adjustments still exist for a large majority of Overwatch players, and even Diamond players were once at a lower rank. This functionally discourages creativity because to succeed in Competitive playing your good characters aren’t enough; rather, you need to constantly play your best characters.

And this pressure to succeed both personally and as a team is a fertile breeding ground for toxic behavior, which has been a persistent problem for Overwatch.

Thankfully, Quickplay remedies all of that. The biggest strength of Quickplay is that there is no skill rating tied to it. In other words, there are basically no consequences for anything, which is an environment that fosters creativity. Overwatch, a game with 27 very different playable characters, should be able to support a near limitless amount of play styles and team compositions. In Quickplay, you have the freedom to play the whole compliment of characters. Tank main and want some variety? Try out Zenyatta. Why not? Maybe you’ll love him!

There’s a more holistic reason why not having big consequences for losing helps, too, and that is this: without trying so hard to win, you can stop and smell the roses more. In other words, you can appreciate the nuances and flow of the game in a way that you couldn’t if you were trying to win at all costs. Maybe there’s a really hype play, perhaps not even by your team, that you acknowledge and laugh about when you might otherwise be distracted by trying to get the payload just a few more feet to avoid a loss. Maybe you and an opponent have a silly emote standoff before somebody gets hilariously sniped by a Widowmaker. Overwatch is a colorful game brimming with personality, and that personality is too often ignored in the face of competition.

If you’re an Overwatch player, you’re in it for the long haul. There will be times you will feel down on the game, maybe after a series of losses. And while Competitive play is uniquely enticing, it is not all of what Overwatch has to offer. Quickplay is also a part of Overwatch, and choosing to play Quickplay sometimes is going to make your relationship with the game far healthier, which will in all likelihood lead to better competitive matches.

See, video games aren’t inherently about winning or losing. No game developer sets out to create a game so that players can win at it. Video games are about fun. Is winning a part of the fun? Certainly. Winning is all sorts of fun.

But you won’t always win, and if your enjoyment of a game is only tied to winning, that’s not particularly stable or sustainable. You won’t always win in Quickplay, either. But dabbling in Quickplay allows you to enjoy Overwatch purely as a video game, a game where experimentation is encouraged, risks can be taken, and playstyles can be tested.

Competitive is still going to be the core mode for many Overwatch players. That’s totally understandable, because it’s awesome. But it shouldn’t be the only mode you play, because it has its drawbacks. Playing Quickplay will allow you avoid getting in a rut and further your enjoyment of a game that has become a worldwide phenomenon because it is, simply, fun.