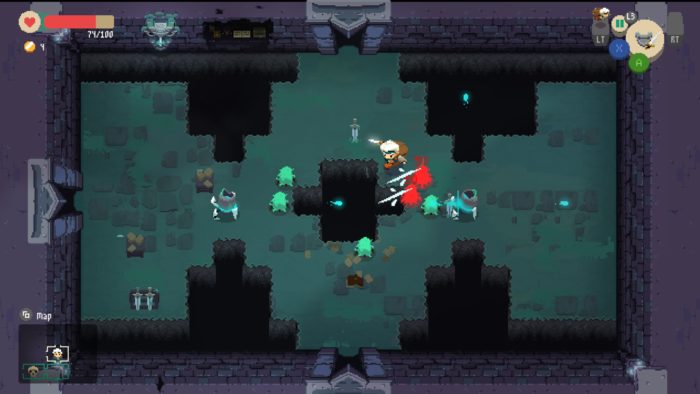 Who says the life of a shopkeeper has to be boring? Introducing Moonlighter, an action RPG where players take on the role of Will, a storekeeper who secretly longs to be a hero. After years of development, Moonlighter has been confirmed for release on the Nintendo Switch, PlayStation 4, and Xbox One. It will also be available on Steam for PC, Mac, and Linux.

Moonlighter’s gameplay revolves around Will’s daily life as he balances between being a shopkeeper and an explorer. As a storekeeper, the player will put up items for sale, choosing what they believe to be a reasonable price based on their customer’s reactions. The player must also keep an eye out for any thieves who want to rob the store. With enough gold, the player can update the shop, allowing for more storage and showcases. As the player finds themselves focusing more on the dungeon aspect of the game, they may choose to hire a store manager, who will help run the store.

As one might expect from an RPG, the player can accept quests by talking to fellow villagers. As the game progresses, customers coming into Will’s shop may request specific items. If the player can deliver on time, they will be rewarded for their efforts.

Stylistically, Moonlighter features pixel art and sprites for its graphics. Crafting menus seem to have a clean display, and have the added touch of displaying a full body portrait of the relevant craftsman on the left of the screen, as seen in the game’s Nintendo Switch trailer.

Moonlighter, developed by Digital Sun and published by 11 Bit Studios, is set for release Q1 2018.