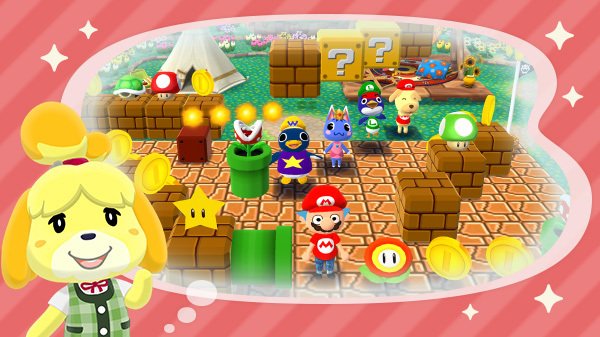 This Mario Day, if you manage to take a break from touring Google Maps with Mario, you’ll find that Animal Crossing: Pocket Camp is also in on the festivities with a Mario crossover event that is already underway. Mario day (also stylized as MAR10 day) has been an annual celebration by Nintendo, incepted because the date March 10 kind of looks like the name Mario when written as MAR10.

Isabelle’s own Twitter account (@animalcrossing) explains that “you’ll be able to turn your campsite into the Mushroom Kingdom!” The event was originally teased a few days ago with a peek at some of Mario’s famous items, but has now been officially revealed as the Super Mario Crossover Event.

The image shows a whole host of goodies that you’ll be able to acquire during the event. This includes: a coin, super mushroom, green koopa shell, starman, fire flower, 1-up mushroom, piranha plant, blocks, question mark blocks, and a warp pipe. You can also pick up some stylish new duds inspired by Mario, Luigi, Wario, and Princess Peach. A new flooring option is also available that hearkens back to the original Super Mario Bros.

A new event starts tonight at 10pm PT…and it looks like you'll be able to turn your campsite into the Mushroom Kingdom! Hey, don't I know that guy? #PocketCamp pic.twitter.com/HWXMxcjJXx

A tweet from the UK Animal Crossing Twitter account states that we’re currently in round 1 of the crossover event. In round 1, you’ll be able to craft items that let you dress up as Mario: these being the Mario cap, shirt, and mustache. You’ll also be able to craft the koopa shell, super mushroom, coin, block, and floor pattern.

Let us know how you’ll be spending your Mario day in the comments below!