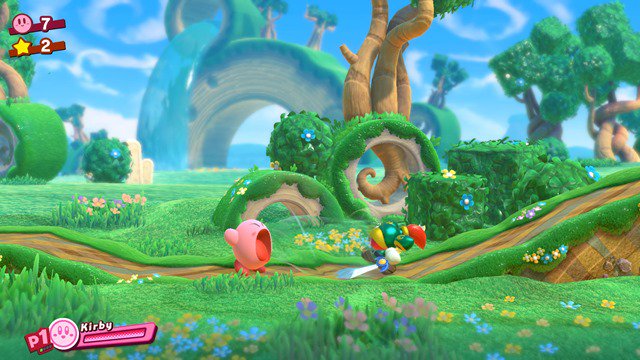 Kirby: Star Allies is rapidly making its way toward the Switch, and it looks like some players have had a chance to play it a lot sooner than others. It looks like Nintendo has released a trial version for the European eShop of Kirby: Star Allies, with no sign of a similar release for North American players.

It was suggested back earlier this month by way of an errant ad on Google that a demo may be hitting the eShop, but nothing had been confirmed until now. The demo is a pretty decent-sized one, with two stages that you can try out to get a feel for the game. It comes with both the Grasslands Stage and Cave Castle Stage labeled as both “easy” and “hard”, respectively. They sound like the same old adorable Kirby we know and love, with sprightly areas to traipse through and try out Kirby’s array of awesome powers.

Up to four players can journey through Dream Land together anytime, anywhere in #KirbyStarAllies! A free demo is now available from #NintendoSwitch #eShop.
<(^.^)> https://t.co/W3L2M6BK4q pic.twitter.com/fpyWyqo2QH

Kirby: Star Allies is scheduled for a Switch release on March 16, 2018 so there isn’t much time left to wait, but we must wait nevertheless. Hopefully a demo is coming for everyone’s gaming pleasure in the near future. We’ve had a pretty good year as Kirby fans, what with a 3DS downloadable title released earlier this year, so it’s a good time to be a Kirby faithful, it seems.