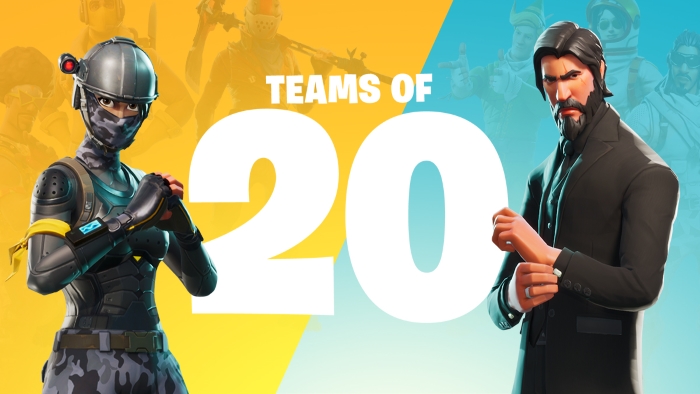 The 3.2 update for Epic Games’ Fortnite goes live today for all platforms, bringing bug fixes and other changes to both Battle Royale and Save the World modes.

According to the patch notes, Battle Royale received a ton of little fixes with UI, audio, and other facets around gameplay. Significant changes include fixing the accuracy of the hunting rifle for a straight shot when not moving and giving players credit for eliminations caused by forced fall damage through Impulse Grenades or destroying structures underneath other players. The notes contain some odd fixes, such as “Riding a rocket no longer cancels emotes or using consumables” and “Fixed the kitchen cabinets that were placed outside of some houses.”

Another limited-time mode comes to Battle Royale alongside the new update, replacing the Solid Gold mode that began last month. The new mode, Teams of 20, splits the usual 100 players into five teams of 20. Though the personal squad limit is still at four players, all teammates will be shown on the map with green arrows. Epic has also increased the spawn chances of chests, ammo boxes, and rate of supply drops for the mode to account for cooperating squads collecting supplies in the same location.

Fortnite’s Save the World mode received the Boost Pad for high-speed hoverboard races and the Cozy Campfire Trap, while reworking Group Missions with more mission types and earning experience for lower level missions. Weapon and trap perks also received balance changes to “make several of our non-damage perks more viable, while creating a wider range of desirable weapon builds,” according to the developer.

Fortnite has seen plenty of updates since the new year began. The 2.5.0 update added Valentine’s day quests, outfits, and the Cupid’s Crossbow to celebrate the holiday, while the 3.0 patch brought building improvements last month during Battle Royale’s Season 3. The new season is currently offering a Battle Pass containing 76 new cosmetic items that can be earned through unlocking 100 tiers.