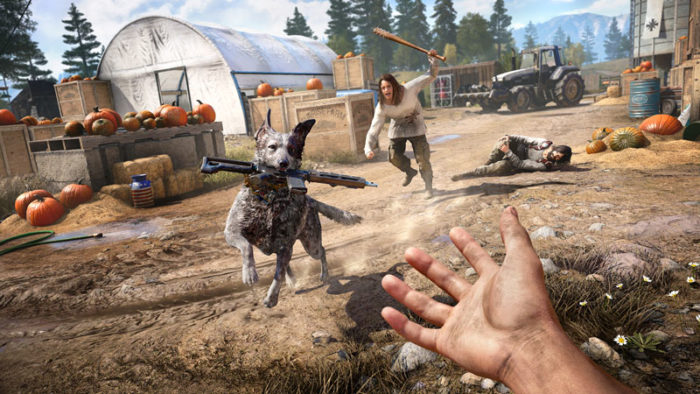 Far Cry has become one of Ubisoft’s staple franchises this generation, offering players unbridled freedom across the snowy mountain tops of the Himalayas or the brutal terrain of the fictional Oros Valley in Central Europe. Far Cry 5 seeks to empower players in the same way as they explore the lush forests of Hope County, Montana. Unfortunately, however, from what I’ve seen of the game, it ends up offering players little in its unspectacular open world design, intel gathering, and progression system, the likes of which often make gameplay more of a chore than a delight.

The heart of the game lies in its story and co-op campaign component from what I noticed, the former being highlighted by the tyrannical “Father” Joseph Seed. When the game begins, you and a group of fellow police marshals are tasked with bringing the leader of PEG (Project at Eden’s Gate) cultists to justice through a warrant issued by the federal government. What ensues after the man’s arrest is best left up to your own imagination, though it is great to see Seed live up to his potential as a diabolical leader who controls not only all aspects of communication into and out of the county, but most of the populace itself. It makes the situation feel real and, undoubtedly, more scary as a consequence.

Co-op, too, is another highlight of the game. Sitting in the backseat while your buddy drives, shooting shotgun pellets into cultists you pass by is something you can get used to fairly quickly. Running around the map together and going in all guns blazing while your friend picks off enemies from afar gives you a sense of accomplishment that other games in the franchise – outside of Far Cry 4 – have failed to match. Recruiting guns (or fangs) for hire, to join your party (like in the series’ second main installment) adds even more fun into the mix. Watching a gigantic bear named Cheeseburger devour crazy people one by one is something you and your teammate can admire while you sit back and plan out where you’ll go next.

All of this is just the tip of the iceberg and will no doubt turn any lonely night into something memorable. The major downside to co-op, then, is that progress doesn’t accrue for each player, meaning one person will act as a guest to another from Far Cry 5’s beginning to its end. This also means that only one person is able to view cutscenes, leaving the other person in the dust until gameplay resumes again. It isn’t a deal breaker, though it does sever the immersion a little bit, and provides less incentive for guests to join in on your game if they get nothing in return.

When considering Far Cry 5’s open world design – regardless if you’re playing solo or with another person – navigating the area on foot is uninspiring, as you’ll run into cliffs and/or walls that constantly force you to climb around the landscape in order to get where you want to go. If you run into a river and need to swim over to the other side, be prepared to be staring at your screen for a good couple of minutes. Though these are things that admittedly a lot of open world games suffer from, it doesn’t give Far Cry 5 or any other title in the genre an excuse, especially if these geographical barriers aren’t clearly outlined on a map. Vehicles, then, seek to ameliorate these circumstances, yet are equally as frustrating as a means of travel due to consistent cultist roadblocks on the highways and a self-driving mechanic that failed to take me to the correct destination I set up on my map. This was a problem that Far Cry 4 had and, sadly, hasn’t really been improved upon in this next installment.

Speaking of driving mechanics, Far Cry 5 offers players the chance to race against the clock in the off-road Clutch Nixon stunt missions which prove that the development team still hasn’t improved upon the series’ poor steering. I constantly found myself running into the track’s boundaries or flipping over after speeding over a bump and had to back up and accelerate again multiple times just to make it to the next marker on time. After a good couple of minutes trying to accomplish my first stunt mission, I quit and never looked back.

Far Cry 5 does try to change up the formula, perhaps most notably by removing the watchtowers that gave players the ability to view all nearby items to collect within a specific area of their map. In place of this, the game was designed with the intention of making players interact with NPCs scattered about the region in order to gain valuable intel. This information may or may not be true depending on the person, meaning you could go halfway across the game’s map only to end up with something completely different than what you set out for (or nothing at all). This is done on purpose to replicate real life situations of imperfect people spreading misinformation and pointing you in the wrong direction.

Though it is true to reality, my experience with this mechanic was unfortunately more annoying than immersive. To illustrate, I saved an NPC from a cultist outpost and had him tell me that there was a weapons stash hidden by the dock. I travel a couple of minutes to get to said location, only to discover that the door to this possible weapons stash is locked and needs a key to open. This has me go look for a key, the whereabouts of which I have no inkling of, as there are no enemies nearby. In an effort to find out where I could find this key, I think it best to go back to the man who sent me out on this quest in the first place, only to turn up with nothing for my travels and all the time I wasted. I felt like I just got pranked or was being made fun of, which is something I never want to feel when playing a video game. Thankfully, this mechanic isn’t tied to every item, collectible, or hunting area in the game, as you can also interact with street signs and manuals hidden in desks to find out useful information, too. It’s also the only instance in which I encountered the phenomenon, so it may not be indicative of how the mechanic is used with other NPCs in the game.

Progress towards facing each of Far Cry 5’s three regional bosses (Jacob, John, and Faith Seed) is earned by liberating cultist camps, saving NPCs scattered about the map, completing side quests, and demolishing cult outposts, meaning just about everything you do in the game counts towards the end goal of going toe-to-toe with Joseph. This structure sounds empowering on paper, though I found that in just one hour with the title, one should almost always go for freeing camps, as those tend to house hostages that, once freed, will yield even more points for your reputation meter. After finding this out, I only actively sought out side quests or demolitions if they were in my vicinity – after all, with so many camps scattered around the map and my particular region being a pain to navigate in general, why go out of my way? In a way, this soured my relationship with Hope County even further, as I had no incentive to trail off the beaten path to immerse myself in whatever else Montana had to offer me.

Thankfully, the game includes the return of a map editor through Arcade mode. While the developer claims that this entry’s map editor will be “more packed with content than it’s been at any point in the series’ past” and include assets from the Assassin’s Creed, Watch Dogs, and Rainbow Six series, I myself didn’t get to witness these phenomenon in action. What I got instead was a curious developer-made single-player map set within Arcade’s new Journey mode, which plays akin to a walking simulator or puzzle game. This map evidenced how Far Cry 5’s assets could be used in bizarre ways to create a dreamscape filled with clocks suspended in midair and scary sheep that bleat at you when you’re not looking. The level was just a short, straight path to the finish line, though it was fun and interesting while it lasted. Seeing as how Arcade is meant to supplement the main experience of roaming around Hope County (with players supposedly able to access the mode through arcade cabinets in bars), I can see this serving as a brief distraction should one get tired from shooting cultists all day.

Arcade also includes a deathmatch multiplayer mode, which sees Far Cry 4’s five on five PvP arenas return. Specifically, myself and nine other people were treated to a developer-made beach map featuring a gigantic Buddha statue from the aforementioned fourth main installment. If you played this mode in Far Cry 4, you’ll more or less be familiar with the small map size and standard assault rifle, handgun, and sniper loadouts we were offered. Two tiny islands joined together by a bridge didn’t exactly provide for the most strategic gameplay opportunities to one-up enemies on the other side, and Far Cry’s gunplay mechanics still just aren’t up to par with the sleek controls and fast-paced action of other shooters on the market. There may be some way to optimize these issues through the map editor, though I can’t say for sure.

What I can say for sure about Arcade’s Journey maps and PvP mode is that each has the potential to serve as neat distractions from the thrills of Hope County, Montana, if only for a brief couple of minutes and a round or two of deathmatch. I didn’t get to see what piqued my interest in the feature in the first place – the map editor itself – therefore, I can’t say whether or not it would be easy to pick up and use in practice, nor confirm if the two developer-made maps pushed the limits of what’s possible in Arcade.

As far as the main game is concerned, what I witnessed of Joseph Seed’s menacing rule had me engaged enough to want me to continue playing Far Cry 5 further, though I can’t imagine I would play for long without seeing him again. Here’s hoping Far Cry 5 doesn’t take a page from Pagan Min and actually delivers in that respect, because what I’ve seen of the game’s setting, mission design, and poor gameplay choices aren’t doing it any favors so far. Of course, I’ll have to wait until the game fully launches on March 27 to be entirely sure, but until then I’ll be playing something a little more exciting and a little less frustrating.