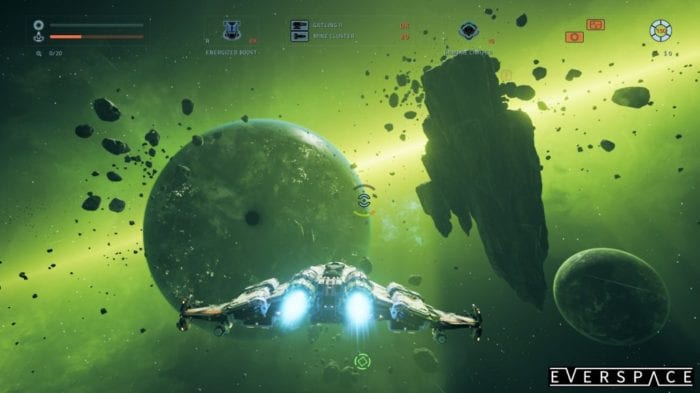 Rockfish Games released a new teaser trailer earlier today stating that Everspace is scheduled to arrive on PS4 this May. The game’s expansion, Encounters, will be available on the PlayStation Store as well.

The trailer also mentions a boxed Galactic Edition that will be published by Badland Games. The Galactic Edition features Everspace for PS4, the Encounters expansion, an original soundtrack featuring over 60 songs, and an exclusive manual featuring details about Rockfish Games and inspiration for the game itself. More details on the release and the boxed edition will be coming soon.

Everspace, previously released digitally on both the Xbox One and Steam, is a 3D roguelike space shooter. The game is fully voice acted and features three unique ships to pilot. It features a unique death mechanic, upon each death, allows the player to improve the starting conditions for all of his or her following runs, mainly through ship upgrades. More information can be found on the game’s official website.

The game’ expansion, Encounters, adds roughly 10 hours of gameplay. Some of its biggest additions include new quests and characters, as well as a new ship to pilot. It also includes more equipment and new enemies to battle.

Currently, the game can be bought on Steam for $29.99, or $37.47 if you want to buy the Ultimate Edition. The Ultimate Edition features the expansion, the official soundtrack, a digital artbook, and a set of 4K wallpapers. Since its release back in May of 2017, the game has received an overall player rating of “Very Positive” in the Steam store, and a rating of 3.5 stars on the Microsoft Store.

Everspace will arrive on the PS4 on May 29. Check out the aforementioned trailer below.