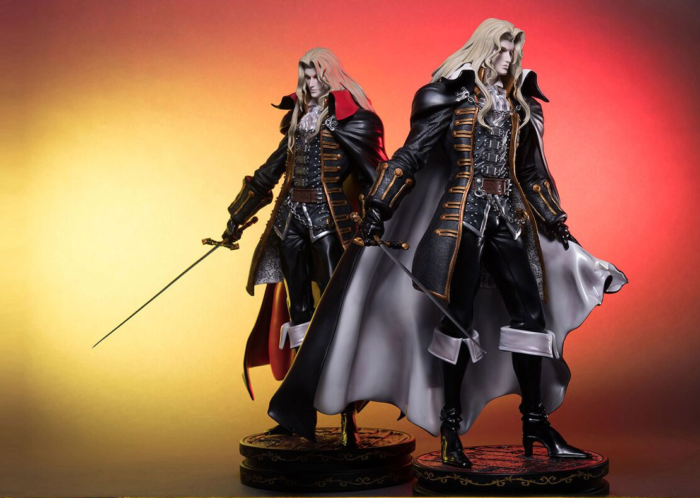 Castlevania: Symphony of the Night is easily the most famous entry in the Castlevania franchise. It popularized the metroidvania game genre and is the bar by which all other Castlevania games are measured. With that popularity has come a good deal of attention and merchandise, including a new collectible statue of the game’s protagonist, Alucard, designed by the company First 4 Figures.

What is a First 4 Figures collectible Alucard statue? Well it isn’t a miserable little pile of secrets, I can tell you that much. Instead, it is massive, meticulously detailed sculpture that serves as the centerpiece of any gamer’s collection. This beast of a statue is 21 inches tall, 14 inches wide, 12 inches deep, and weighs approximately 13.8 pounds. And with these massive dimensions comes an equally massive price tag of $499.99 plus shipping and handling. That’s as much as a Microsoft Xbox One X console. This statue was first shown to the public during New York Comic Con 2017, where it received the approval of Koji Igarashi, the man who directed Castlevania: Symphony of the Night.

First 4 Figures has made a name for itself with its statues based on popular video game characters, including Dark Souls’ Dragon Slayer Ornstein, Shovel Knight’s titular Shovel Knight, Super Mario’s Bowser, and Okami’s Amaterasu. First 4 Figures is also known for releasing multiple versions of these statues and providing extra little accessories for customizable display options, and the same applies to the Alucard statue.

Castlevania fans can purchase the Regular, Exclusive, Twilight Edition, or Combo Edition versions of the Alucard statue. The Regular version is just Alucard holding his sword and comes with an authentication card, while the Exclusive version adds an artprint, an extra swappable sword, and a swappable arm that carries a shield (all for no additional cost). Meanwhile, the Twilight Edition comes with everything in the Exclusive version but changes Alucard’s white cape to a vivid red, and the Combo Edition is a bundle that contains both the Twilight Edition and Exclusive versions, as well as two hologram stickers and two cards signed by First 4 Figures owner Alex Davis.

While the statue isn’t scheduled to release until next year, fans who wish to pre-purchase it can do so starting today. First 4 Figures offers several payment plans for buyers who would rather pay as they go instead of spending one lump sum. Moreover, the company is giving away one free Alucard statue, so those of you who want it but don’t want to spend the money, here’s your chance.