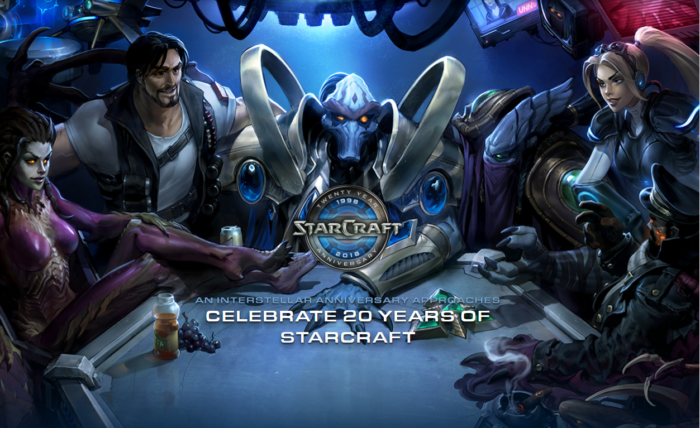 The StarCraft series is celebrating its 20 year anniversary in March and Blizzard is throwing a virtual celebration. Blizzard is known for its synergy between its franchises, and this time it’s no different. For the month of March, Blizzard will be giving away free items throughout all of its games.

Log in to StarCraft: Remastered or StarCraft 2 for a free 20th anniversary UI skin. Additionally, for the second game, you can receive a special portrait and decal anytime between March 6 and April 3.

Following up with Diablo 3, players can receive a free Battlecruiser themed pet.

Starting on March 31, World of Warcraft users can obtain the “Salute to StarCraft” Feat of Strength. This is achieved by saluting one of the already existing pets. These include the Zergling, Grunty, Mini Thor, Baneling, or Zeradar.

Heroes of the Storm will receive free player portraits for the Protoss, Zerg, Terran, and Zerg between March 27 and April 7.

The celebration continues in Overwatch, where players can enjoy a Sarah Kerrigan Ghost skin for Widowmaker. Players simply log in between March 3 and April 3 to receive the new skin.

Stay tuned, as Blizzard is celebrating this milestone all month with developer interviews, video features, and much more! StarCraft 2 recently went free to play, so be sure to check it out if you haven’t!