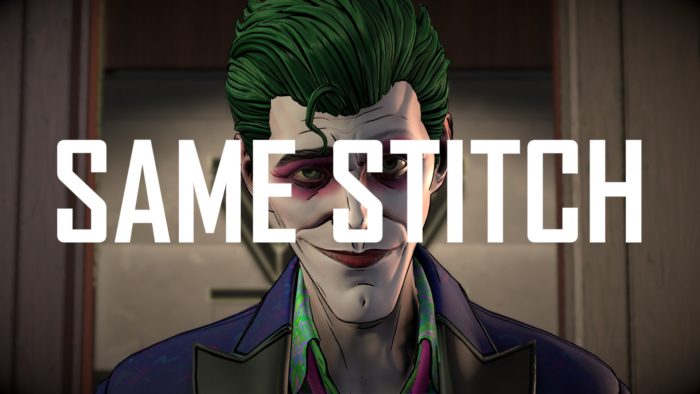 Batman: The Enemy Within – Episode 5 on PC

Everything comes to a head in episode 5 of Batman: The Enemy Within. The aptly titled episode, Same Stitch, delves deep into the relationship between Bruce and John Doe, and all of the choices that you’ve made up to this point culminate in a conclusion that properly defines the kind of bond shared between those two characters.

To date, this final episode is probably one of the very best we’ve seen from Telltale. While the rest of the season had its ups and downs (and some of those downs were pretty bad), Same Stitch makes up for almost all of the missteps in the previous four episodes. There are still some annoying loose threads left hanging, but for the most part, it’s a satisfying conclusion that does justice to characters like Joker and Waller. For starters, depending on how your episode 4 ending turned out, your episode 5 experience is going to be very different. Episode 4’s ending saw John Doe’s evolution into either a vigilante or villain, and if you don’t load a previous save to see both routes, you’re only getting half of the content in episode 5. It’s that substantial.

On that note, I’m pleased to report that both routes were immensely satisfying to play through, without either one feeling like the ‘proper’ or canon ending to the story. Whether John chooses to fight by your side as the Joker, or becomes the iconic villain we all know him as, neither route felt rushed or insubstantial in any way. Personally, I found it much more thrilling to go down the villain route, watching as Joker goes completely batshit insane while trying to get his revenge on Bruce and Batman for manipulating him. On the other hand, there’s something deeply unsettling about the way vigilante Joker looks up to Batman at every turn, while also letting his darker impulses slip through from time to time.

At the end of the day, episode 5 makes it abundantly clear that you, the player, are the one who created the Joker. Whether as a vigilante or villain, there’s no denying that the Joker is a frightening entity, and it was your actions and words that have been enabling him this entire time. Telltale wastes no time in baring the consequences of your actions to you, and because of how well John Doe has been developed as a character over the course of two seasons, you can’t help but feel responsible for everything that comes after.

Aside from the Joker’s role, the entire narrative arc of episode 5 also changes depending on what route you’re on. Harley’s role in the story varies in significance depending on your episode 4 ending, and so too does Bruce’s relationship with Waller. It’s still immensely disappointing to see that iconic villains like Freeze and Bane are eventually cast to the side in favor of telling Joker’s story, as I’d predicted two episodes ago, but Telltale makes up for it by developing Waller further as a character. Again, her feelings towards Bruce and Batman are drastically different in both routes, and I strongly recommend playing through both of them to see just how much depth there is to her. You could play through the whole game without ever stepping on her toes and have her be an incredibly valuable ally, or suffer her wrath and see the lengths she’s willing to go to in order to get what she wants.

Many other loose threads are tied up, including the mystery of Riddler’s death, and Tiffany’s association with Bruce. For all of my complaints about Tiffany in the past four episodes, she does get good screen time in episode 5, and I’m certainly looking forward to seeing more of her in a possible future season. Other subplots, however, are quickly forgotten. As mentioned previously, Freeze’s fate is still unknown, the romance (or friendship, if you went that way) between Bruce and Selina is left unresolved in a pretty unsatisfying manner, and it seems like Gordon’s story still gets snubbed no matter what you choose. The episode’s final choice itself also feels a little contrived, especially when all the signs are pointing towards a sequel.

Despite its issues, episode 5 of Batman: The Enemy Within stands tall as one of the very best and most well thought out episodes we’ve ever seen from Telltale. Your decisions finally feel like they actually matter, and the story delivers a powerful resolution to the two characters we’ve been following closely all season.