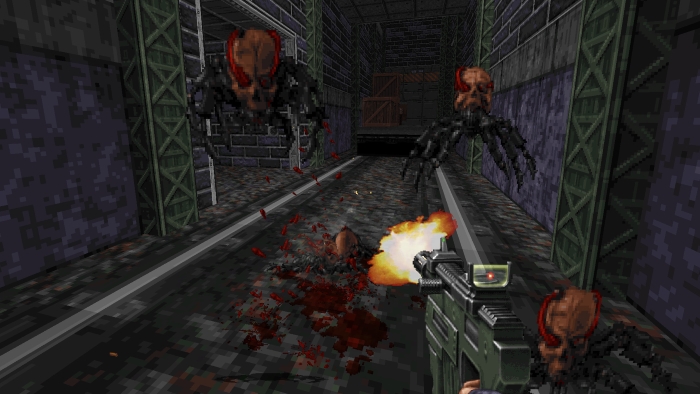 Ion Maiden is billed as an “old-school first-person shooter” which was created on the Build engine, the same engine that powered Duke Nukem 3D and 1997’s Shadow Warrior. Though it will retain the pixelated look of the two games from the late ’90s, the studio said the game would have bigger levels with “morphing maps that transform mid-level” and “more physics and interactivity,” controller support, widescreen, and auto-saves.

“Bringing back classic build-engine shooters has been our aim for years, so we’re diving right into a spiritual successor to the games which put 3D Realms on the map,” said 3D Realms vice president Frederik Schreiber in a press release. “The team assembled for this project knows exactly how to execute our vision, and we couldn’t be more excited to finally bring back a true 3D Realms shooter.”

Ion Maiden is a sequel to 2016’s top-down action game Bombshell, featuring the same protagonist Shelly “Bombshell” Harrison in a quest to stop Dr. Jadus Heskel’s cybernetic army in Neo DC. Like the late ’90s shooters, there will be different colored keycards, secret areas, and no regenerating health.

Ion Maiden is now available for $19.99 through Steam Early Access and DRM-free through the developer’s website. The game is schedule to launch for PC, Mac, and Linux in the third quarter of 2018. Check out the announcement trailer below.