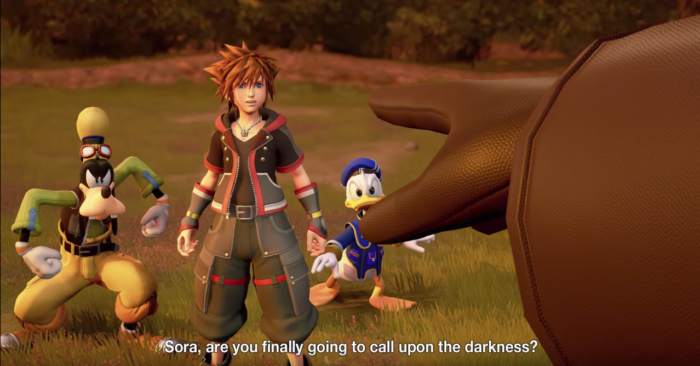 Kingdom Hearts III received boatloads of new information during the D23 Expo in Japan this past weekend, like the fact that the game will include a Monsters Inc. world and the new Gummi Ship sections will have some sort of open-ness to them, more so than in previous entries. We also heard a preview of the new theme song, Don’t Think Twice, being performed by Utada Hikaru with a new trailer to boot.

Tetsuya Nomura, series director, provided some inside information on the development of the game. He states that the development of the game has been split into three sections: Early, middle, and late, which seems to correspond with different parts of the game. The early worlds are about 90% complete, with the middle worlds being about 60% complete. What’s really intriguing and exciting is what Nomura teased about the final parts of the game and that it “was something I’ve always wanted to do and put into Kingdom Hearts, ever since the days of working on Final Fantasy. It is bound to surprise everyone.”

Kingdom Hearts III is meant to serve as the final chapter in the Xehanort Saga or the ‘Dark Seeker Saga.’ It doesn’t necessarily mean that Sora’s journey will be coming to an end but it does mean that the ending for the game will most likely make us scream with either excitement, fear, or pure shock.

We still don’t know when Kingdom Hearts III will exactly be coming out, but we do know that Square Enix is planning to announce an actual date come E3. The title is still slated for a 2018 release for PlayStation 4 and Xbox One.