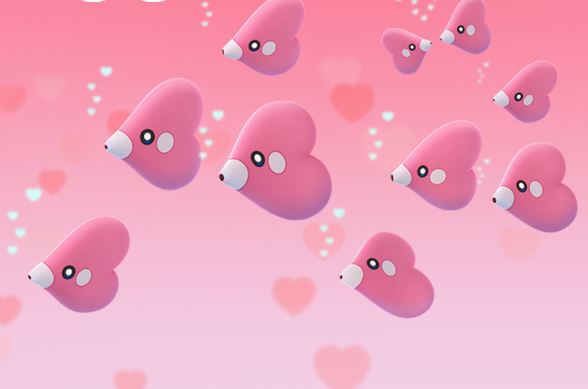 If you’re out and about this Valentine’s Day, you might want to play some Pokemon GO, because Niantic has a heart-shaped surprise for you.

For the next three days, trainers will encounter plenty of the Rendezvous Pokemon Luvdisc in Pokemon GO. This plain Water-type is known for having a heart-shaped body and not much else; most trainers catch Luvdisc only to complete the Hoenn regional Pokedex and obtain the Heart Scale item, as it has low stats and makes for a poor combatant. Niantic, however, is giving Luvdisc an extra gimmick for the duration of this event. Any and all successful Luvdisc captures will award trainers triple Stardust, which means Pokemon GO players will have a fairly steady stream of Pokemon that provide 300 stardust (375 if it’s raining). Plus, since Luvdisc has low stats — not quite Magikarp or Feebas low, but still pretty low — they will be relatively easy to capture.

As far as in-game events go, this Valentine’s Day event could be one of Pokemon GO’s smallest holiday events. Compare this event to last year’s. This one only increases the spawn rates of Luvdisc, rewards triple Stardust for each Luvdisc captured, and lasts three days. But last year:

In terms of features, 2018’s Luvdisc Valentine Event is paltry, but it rewards trainers with Stardust, a resource that is collected slowly, especially when compared to Candy.

While the 2018 Valentine’s Day event only lasts a few days, anyone who is awash in Candy but not Stardust should probably log in to catch a Luvdisc or ten.