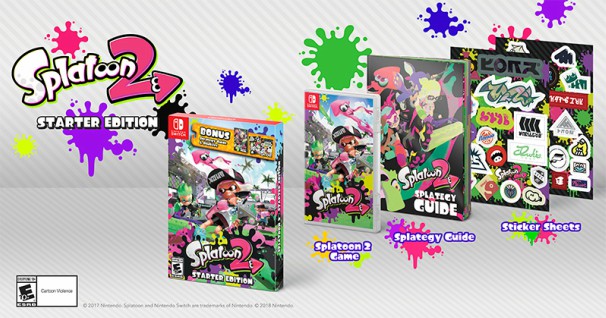 It’s a little surprising that Nintendo didn’t hold this for the launch of the Switch online service, but the company’s just announced the Splatoon 2 Starter Edition. This new re-packaging will be coming to stores in Mar. 16, and it comes with quite a few new goodies as well.

‘The special bundle of the hit Nintendo Switch game includes the full game, a 100-page Splatoon 2 strategy guide to equip you with skills to climb the competitive ranks and two sheets of Splatoon stickers, all at a suggested retail price of only $59.99. That’s the same price as the stand-alone game, so this new Starter Edition adds even more value.’

It’s a pretty good deal, especially when you think about all those sweet stickers you’ll be able to paste all over your Switch. In related news, the next Splatfest will be kicking off this week. In line with Valentine’s Day coming up tomorrow, the theme of the Splatfest is love versus money, and players will have to choose which one is more important to them. Nintendo also recently announced a couple of new Pearl and Marina amiibo which look pretty sweet as well, so there’s plenty to look forward to if you’re a Splatoon fan.

Splatoon 2 is now available exclusively on the Nintendo Switch.