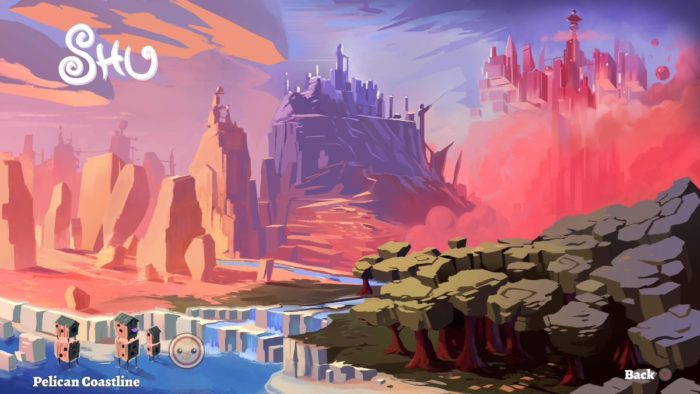 Side-scrolling platformer games and Nintendo go hand in hand, and now there’s a new one on Switch’s eShop that deserves your attention. It’s called Shu, and though the Switch port of this wonderful indie gem is the fifth platform it’s been made available on, there’s no doubt in my mind this is the definitive version of the game.

I actually reviewed the PS4 release of Shu back in 2016, and then enthusiastically played it again later on Sony’s handheld, mostly because it always felt like a perfect match for handheld gaming. Now we’ve got the best of both worlds on Switch, and I’m happy to report that nearly two years on, I’m still struck by just how entertaining this wonderfully graceful platformer is. Shu has a fluidity and elegance to its gameplay that matches some of the most iconic Nintendo-developed platformers from which it clearly takes a great deal of inspiration from. Yet, thanks to its own uniquely beautiful aesthetic and a terrific score, Shu manages to avoid feeling stale in a genre that’s as old as the hills.

There won’t be many accolades for Shu’s story, mind you. This is a simple tale in which a peaceful village of bird-like creatures is blighted by an apocalyptic demon, and a young chick named Shu’s quest to vanquish it, rescuing his friends along the way. It’s nothing you haven’t seen before, but that being said, there’s something charming and resonant in the way the game’s music and still-frame cutscenes translate the story. By drawing on the strength of its aesthetic and score, Shu does actually manage to breathe life into the simplicity of its narrative premise where in other games one might easily have forgotten much sooner.

However, gameplay is where Shu really shines, which is a good thing since any newcomer to a genre with a lineage as long as the side-scrolling platform game needs to be topnotch to hold its own in 2018. Thankfully, Shu’s fast-paced action still feels outstanding to play. Beyond the usual platforming controls, Shu and his companions have special abilities, so you’ll be juggling more than just timing your jumps and changing direction. Shu has a blouse which acts like a glider to extend basic jump abilities. And as you work your way through each level and rescue his buddies, they grant a new ability to chain together. The levels are all tailor-made to take advantage of any two combinations: Shu’s yellow companion can dance on top of the Warbling Wood level’s water, while its flower-padded inclines cushion the wall-jump of his purple friend. Other levels introduce double-jumps, floor-stomps, and time manipulation to name but a few. Adorably, too, Shu and his friends all link hands together for the rest of the level once discovered, and as an ability is used, sound off in delightful song.

I love that the design of each level never forces you to slow down, and though more difficult sections require careful timing and precise platforming, it all feels intuitive and fluid. Only its most challenging sections require trial and error, and there’s almost a rhythm to proceedings that encourages you to play gracefully. The finale of certain levels see the demon chase you down, and you’ll have to up the pace to avoid its gaping jaws. These are certainly the most stressful moments in what is otherwise a rather peaceful and relaxing jaunt.

The story of Shu is spread across six stages, each comprising three levels, and the Switch version includes a bonus DLC stage called Cavern of the Nightjars (six levels). Completing all its standard offerings won’t take you too long, but Shu packs plenty of replayability thanks to a set of challenges for each stage. The game is a speedrunner’s dream, and beating leaderboard scores or simply trying to outdo your personal best works brilliantly with Shu’s fluid, pacey level design. But for those that prefer more methodical gameplay, Shu is also littered with collectibles that form in-game achievements to tick off. And since you can knock levels out in under five minutes, these additional challenges are absolutely perfect for short play-sessions while on the go with your Switch.

Clearly, I’m a huge fan of Shu’s gameplay, but I’d be remiss if I didn’t spend a little longer describing the game’s wonderful aesthetic. The artists really do deserve credit for just how beautiful its stylized graphics are. Shu and his buddies are animated in the 2D style that resembles a sort of hand-drawn colored sketch, and they’re animated with a deliberately low frame rate that gives them a comic book appearance. It’s a stark contrast to the actual levels, however, which are all stunningly realized in a vibrant 2.5D style that looks silky and lush. The contrast is striking and unique. In the end, the combination of its charming art style, uplifting score, and fluid gameplay result in a relaxing sort of experience, punctuated by more anxious moments as you flee the chasing monster.

There isn’t a great deal to complain about, but Shu isn’t a perfect package. As much as I enjoyed its calming sort of gameplay, finishing Shu feels much more like a matter of course than it should. There isn’t enough challenge for platforming veterans here, though that might well be a draw for more casual or younger gamers. Elsewhere, in terms of content, even with the DLC stage included there’s not as much as other 2D games on the system, such as Rayman Legends, Shovel Knight, or the recently released Celeste. And while I appreciated having another stage to play through, Cavern of the Nightjars feels more like a remix of assets rather than something entirely new and different. It’s more Shu, which is great, but I could have gone for some different characters and abilities and would have preferred levels with unique obstacles to traverse.

Those are minor frustrations, however, and they certainly aren’t enough to spoil what is otherwise a super little platformer. Ultimately, while there’s no question that Shu feels like a condensed reimagination of classic side-scrolling games, it’s no empty pretender. There’s polish to its presentation and controls, invention in the way it strings together the combinations of different abilities, and oodles of charm in its aesthetic. Especially as a game to play while in portable mode, Shu is a platformer that any fans of the genre should consider trying.