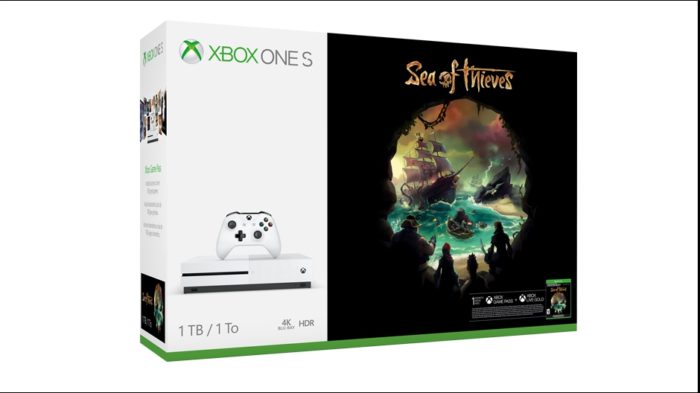 Rare’s pirate-tastic Sea of Thieves is releasing next month, and it’s finally entered the phase closing in on its official release. The global launch is at hand, and it’s time to get hyped for some exploration of the seas and pirating. What better way to get pumped for all of that than with a new Xbox One S Sea of Thieves bundle, which comes with an Xbox One S and a copy of the game?

The bundle will be available on March 20, 2018 for $299.99 via Microsoft Stores online and in person as well as various other retailers. It’s up for preorder right now if you’re interested in picking it up, offering everything you need to get your pirate on. For instance, it comes with an Xbox One S with a 1TB hard drive, wireless controller, 4K Ultra HD Blu-ray player, 4K video streaming, HDR, and Dolby Atmos audio — the typical stuff you get with an Xbox One S.

Aside from a copy of Sea of Thieves, you get a 1-month subscription to Xbox Live Gold so you can take the show on the road, as well as a 1-month Xbox Game Pass subscription that you can use to play around with the service that offers over 100 games to choose from. If you don’t choose to pick up the bundle, remember that there’s a special Sea of Thieves Limited Edition controller up for grabs for $74.99 as well, which has a very appropriate seafaring design.