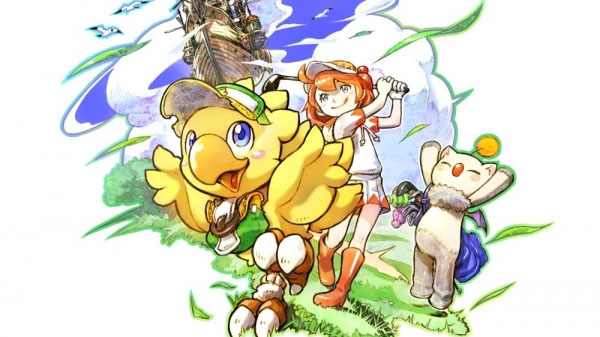 Everybody’s Golf is getting a special Final Fantasy-themed event in Japan, though there hasn’t been word on a Western version of the event just yet. The upcoming promotion is in celebration of Final Fantasy’s 30th anniversary, and there are some new details on what you can expect when the goodies drop at the end of the month for Japanese users. Like having a rideable chocobo!

First up on Feb. 26 is the introduction of the “Chocobo Type” cart, which you can buy for 500 yen. Instead of having a regular golf cart, you can hop on a chocobo and use it as transportation around the course. Not only do you get a chocobo, but you get a special new design by Square Enix illustrator Toshiyuki Itahana, created specifically for Everybody’s Golf. The chocobo will let you jump around, glide, swim, and most importantly ride around on a chocobo. Adorable.

There are also wearable items like a cactuar hoodie and some other costume sets that you can outfit your Everybody’s Golf character with. With the 30th anniversary of Final Fantasy in full swing, there’s a lot to look forward to. Hopefully we’ll get these same promotional items in the west, because they look like some really fun ways to celebrate the game. Plus, if you’ve never even wondered once what it’s like to ride on a chocobo in something of a realistic setting like a golf course, you’re totally lying.