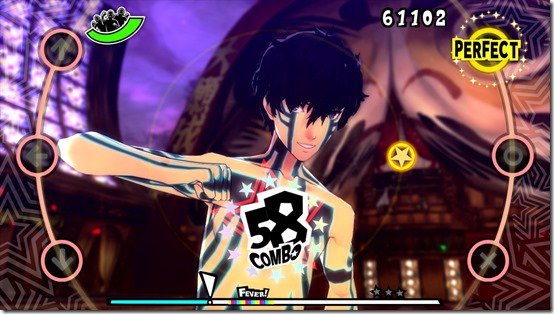 Shin Megami Tensei: Nocturne is one of the best entries in the MegaTen series, and it’s getting a special nod in the upcoming limited edition versions of Persona 3: Dancing Moon Night and Persona 5: Dancing Star Night in the form of a costume. You’ll be able to dress up Joker as the Demi-fiend, or the player protagonist you take up the role of in Shin Megami Tensei: Nocturne. It’s such a cool sin that you might really want to think of preordering the special edition just to add it to your menagerie of goodies. It’s already an iconic look, so it’s not surprising to see Joker donning the instantly recognizable outfit.

Persona 5: Dancing Star Night and Persona 5: Dancing Moon Night will feature dance routines and rhythm game layouts much like Persona 4: Dancing All Night, but neither game will include the story mode from Dancing All Night, which is a bit of a bummer. You’ll still be able to bust a groove with your favorite characters from the Persona series, however, with characters from both Persona 3 and Persona 5 up for you to be able to use.

If you’re looking forward to cutting a rug with Persona characters, make sure you don’t skip out on this awesome costume. It may be the best costume announced thus far, and dancing to familiar songs from Persona 5 and Persona 3 sounds like a great idea too.

PS Plus Offers Shadow of the Colossus, Sonic Forces as Free Games for March