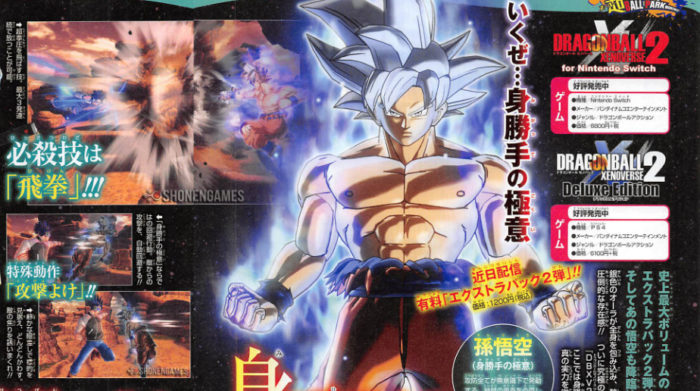 Goku’s latest transformation will soon be available in Dragon Ball Xenoverse 2, along with a new story scenario and other new characters.

In a post to Shonen Gamez, it was revealed through scans of V-Jump magazine that Xenoverse 2 players will soon be able to play as Goku in his Perfected Ultra Instinct form. The new form offers increased damage and the special finisher God’s Awakening Performance, wherein he rushes the enemy with a flurry of strikes and ki blasts before unleashing a one-handed spirit bomb. The DLC will also include Jiren, the primary competitor against Goku in Dragon Ball Super’s Tournament of Power arc, and a new original storyline focused on the Dragon Ball Online antagonist Fuu.

Released Oct. 25, 2016, Dragon Ball Xenoverse 2 is the second entry in the action RPG series tied to the popular anime. Taking the role of a warrior summoned to right the fractured timeline of the Dragon Ball universe, players battle their way through story scenarios, side missions and multiplayer raids using a variety of moves and techniques from across the anime series.

For more Dragon Ball related content, check out our review of Dragon Ball FighterZ, the most recent addition to the pantheon of games tied to the series.