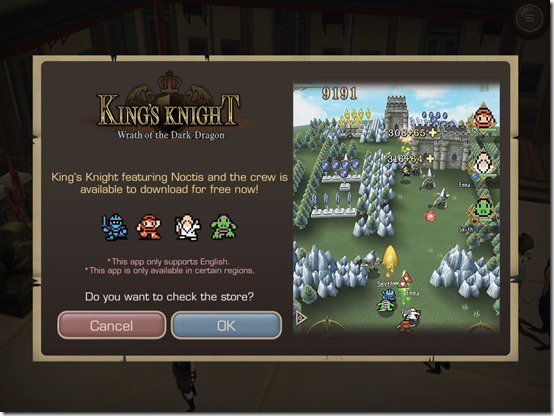 Final Fantasy XV: Pocket Edition has been riddled with advertisements for an iOS and Android title called King’s Knight: Wrath of the Dark Dragon. It’s based on a game that Noctis and crew spend a lot of time playing, and there’s a new crossover event featuring Final Fantasy XV characters that’s taking place in the game right now. Running through Feb. 21 and Mar. 2, you’ll be able to play the game and be matched with one of the four main characters from Final Fantasy XV: Noctis, Gladiolus, Ignis, and Prompto.

Playing with the four Final Fantasy XV characters, you can complete various quests so you can earn War Fellowship Tokens. You can trade those in for special Final Fantasy XV items, like a King’s Knight shirt for Noctis, stickers for your Regalia, and other goodies that includes voice acting lines, messages from the characters on the in-game message board, and more. There’s a lot of fun, Easter egg styled content available to you if you pit the time in.

You can pick up King’s Knight: Wrath of the Dragon right now for free for Android and iPhone, and if you haven’t yet played Final Fantasy XV: Pocket Edition, it’s definitely worth a look especially if you enjoyed the “full-sized” version.