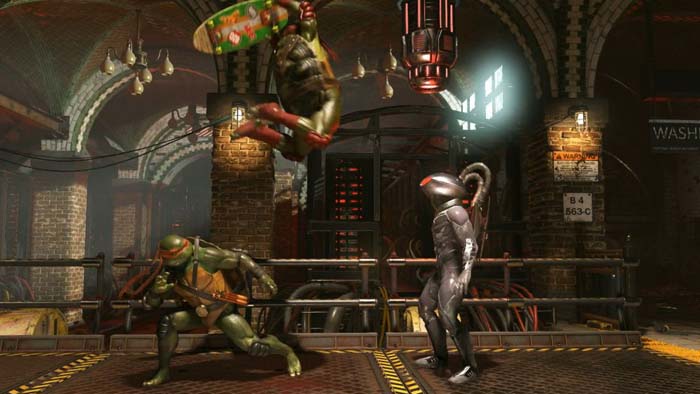 NeatherRealm Studios has recently confirmed that the first gameplay footage of the Teenage Mutant Ninja Turtles’ outing in Injustice 2 will debut this week.

Join us this Wednesday for a special #Watchtower stream featuring #TMNT! https://t.co/xASziaIvRw#injustice2pic.twitter.com/xJ9b2LlQym

The Watchtower stream will surely answer plenty of fan questions, including how NeatherRealm will handle the four Ninja Turtles’ team dynamics in-game. To date, we only have an in-game screenshot of the Ninja Turtles demonstrating “teamwork.”

Donatello, Leonardo, Michelangelo, and Raphael are all part of the Injustice 2 Teenage Mutant Ninja Turtles DLC. An official release date has yet to be revealed by NeatherRealm. Nonethelss, the Turtles will surely become playable this year and can be purchased separately or via the Fighter Pack 3 that also contains Atom and Enchantress.

Injustice 2 is currently available for PC, PS4, and Xbox One. NeatherRealm Studios’ fighting game boasts a total of 38 characters with the season pass, or 41 if the four Turtles are counted separately.