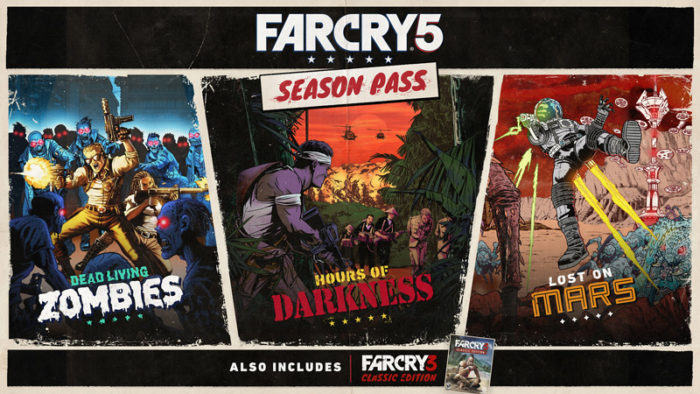 Far Cry 5 is on its way out, and when the game launches we’ll be able to investigate some pretty far-out types of content with the game’s recently-announced season pass. The three adventures will include some pretty over-the-top stories to explore, including aliens and more.

You’ll be able to battle the undead in “Dead Living Zombies,” a bunch of enormous spiders in “Lost on Mars,” and soldiers and Vietcong as you make your way through “Hours of Darkness.” There isn’t a ton of information about any of these specific DLC episodes, but they sound unique and pretty engaging overall.

But there’s more to the Season Pass than these extra goodies, however, If you grab it, you’ll also get the Far Cry 3 Classic Edition, which is an augmented version of Far Cry 3. You can purchase it separately for either Xbox One or PlayStation 4 after Far Cry 5 releases, but season pass buyers get it four weeks early.

If you can’t wait for March, you should go back through and enjoy the first few Far Cry games, which are certainly still ripe for the picking, especially if you enjoy open world adventures. In the meantime, you can watch the latest story trailer for Far Cry 5 to get up to speed on everything that’s happening in the game world. There’s probably a lot that you’ve missed in the meantime.

Far Cry 5 is targeting a Mar. 27 release this year.