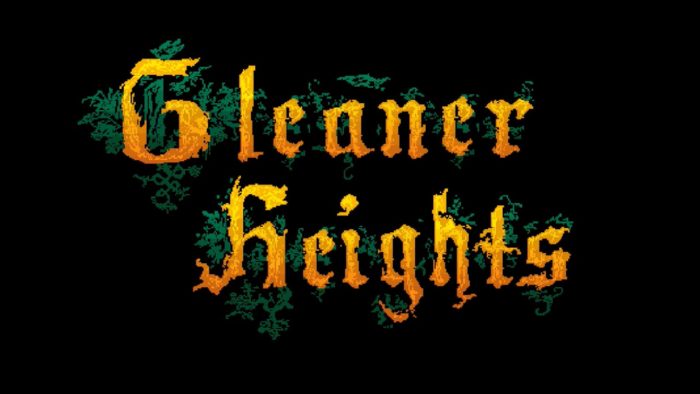 Farming games are really quite charming. You start off by moving to a new locale, eager to get a start on your new life. It’s a rough start, just like in real life, but there’s a steady sense of progression that urges you to keep farming and striving every morning. Simple yet effective, this formula has hooked the hearts of fans throughout the years. In an attempt to provide a new twist to the genre, Gleaner Heights adds an underlying sinister plot, onscreen scandals, and a bit of combat for good measure. And while it might sound promising, these factors just turn the game into one big slow burn.

Since Gleaner Heights is a farming simulator at heart, you’ll be relying heavily on your crops and livestock to make a living. You play as your own avatar who decides to move to Gleaner Heights for no real reason. You have the option of picking your past profession before becoming a farmer, and depending on what you choose, you can get some nifty perks to help you in your new life. After finally creating your character, you are thrown into your farm and left to your own devices. While the freedom might sound nice for experienced farming players, it can feel a bit overwhelming for newcomers. Gleaner Heights doesn’t exactly guide you from then on, and you’ll be grasping at straws for the most part.

That said, the first thing that should come to mind is to start fixing your estate. The land is littered with grass, wood, and rocks, so it’s up to you to clear them. Players start off with the standard farming tools (watering can, hoe, hammer, etc.) and you can buy seeds at the general store. The farming mechanics are fairly standard, with players tilling the land with their hoe, planting their seeds, and watering them every day.

As with most farming games, Gleaner Heights also has a stamina meter that limits what you can do within a day. The meter drains fairly quickly, so you are forced to find or buy items like herbs and food to restore your stamina if you want to keep working. You won’t faint if the meter burns out, but you’ll start the next day with only half the stamina. Similarly, players have to monitor the various weather effects in Gleaner Heights. While rain may water your plants, it can also wash away freshly planted seeds. Meanwhile, there are days when relentless summer heat will easily wither your plants, entailing players to water them twice a day.

You can also purchase some animals from other farms. Depending on what you buy, you can collect other resources, such as eggs and milk, to sell. Caring for livestock also follows a fairly standard process and you can leave them outside the barn to graze, assuming the weather is fine. It’s when they die, however, where things take a slightly eerie turn. Instead of magically disappearing, your farm animals will rot away in your farm. Forced to face the consequences of your actions, you must dispose of the carcass yourself.

Aside from tending to your farmstead, there are a few other activities you can do in Gleaner Heights. There is an open field filled with monsters near your farm, while a dreary mine waits for players near the waterfall. Mining feels incredibly dull as you are forced to simply strike the walls in hopes of finding some good materials, such as copper. I hardly got anything good for my mining trips, and I ended up avoiding the area for the most part unless I desperately needed ore to upgrade my tools.

Players will stumble across plenty of monsters when they explore, but they can fight back with their farming weapons or a bow. Combat is extremely clunky and hit registration feels really strange. You need to stand directly in front of an enemy to land a hit, which makes you wide open to an attack. More often than not, enemies will bombard you with their attacks before you can even land your first hit. On top of that, these mechanics make it extremely frustrating when facing off against fast enemies.

If you continue to hone your daily skills, your character will gain a level. At every five levels, you can choose one out of a list of useful perks when you turn in for bed. Perks aren’t limited to farming as some can help you see better in the dark, grow closer with villagers, or earn more stamina. I personally felt like there were some perks on the list that shouldn’t have been there and could have been given to your character from the get-go, such as night vision. You’re pretty much lost in the dark without it, and it becomes pretty difficult exploring the town during evenings. Because of this, some locked perks felt like roadblocks instead of actual progression.

Farming might be one of the game’s selling points, but you can’t deny the attraction of a “darker” take on the genre. You can choose to mingle with the townsfolk, give them gifts, attend festivals, and become entangled in their twisted personal lives… or you can just ignore everything entirely. But where’s the fun in that? One of the game’s main highlights is trying to uncover the history of Gleaner Heights and everyone’s personal secrets, after all.

So, naturally, most players will want to get out there and try to learn more about the town of Gleaner Heights. The thing is, though, that most of the ‘dark’ character events feel very far and few between. During one stroll, I uncovered a shocking scene involving a man abusing his wife in their house. It was a thrilling incident, sure, but the aftermath killed the mood. The couple stays mum about the abuse the following morning, nor does the local sheriff do anything when you try to talk to him. Nothing really happened after that shocking evening, and I even made it a point to scour the town every night with the hopes of finding more dirty deeds.

It doesn’t really help when the game hardly drops clues about story events and villagers almost always have the same lines. Moreover, the lack of character portraits didn’t really help flesh out the superficial townspeople of Gleaner Heights, especially since some of the others really feel like NPCs casually thrown into the game. Gleaner Heights also suffers from a handful of spelling mistakes, bugs, and awkward writing. Having said that, the game is still brimming with different possibilities. Some of the romanceable villagers are locked behind the story, and there seem to be plenty of other crimes hidden within Gleaner Heights.

The visuals, on the other hand, are reminiscent of the classic Harvest Moon on the SNES. The sprites look fairly decent, but it’s the palettes that really accentuate the game’s gothic themes. The music is serviceable, but nothing about it really sticks out from other upbeat tracks in the farming genre.

I finished my playthrough by burning through a little over after the first year with nothing to show for it. What’s more, I never felt closer to actually learning anything new about the story, which is pretty disappointing since it was built on the premise of delivering a “darker” farming simulator. Because of this, Gleaner Heights never felt too different from most of the modern and classic titles in its genre. There’s a good idea in here somewhere, I just never got to see it.

Despite promising a fresh take on the farming genre, the execution just falls short. Decent farming mechanics aside, the clunky combat and slow burn of a story really just take away from the experience. There should be plenty of things to do in Gleaner Heights, but the lack of clear direction might even boggle the most seasoned farming veterans.