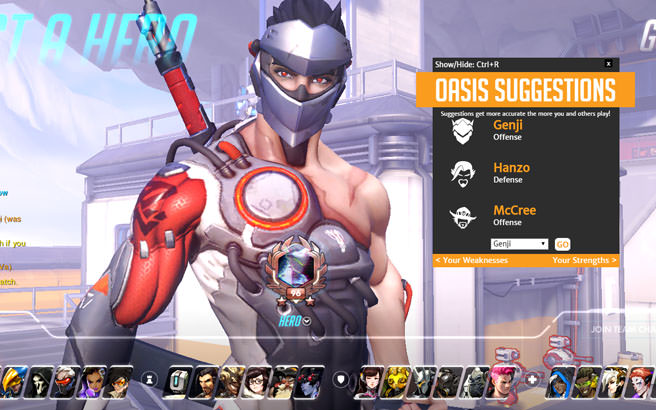 A Reddit post from site creator u/TheC0der has shown off a new way to monitor how you play competitive Overwatch. With some fancy coding work, the project allows you to enter your gamertag and see what your SR would be for every separate Overwatch hero you play in a season.

Taking into account factors like your eliminations, healing done, positioning, damage done/blocked, and other numerous stats, you can see what level you play at for each character you use during competitive Overwatch. The site is titled OASIS, and is described as an Overwatch AI skill improvement simulator.

Clicking on each character will also bring up ways for you to improve based on in-game stats, as well as ways in which you excel compared to other players at your level. The creator is also working on an app that can run along Overwatch on PC as seen above, which could not only tell you your strengths and weaknesses for each player as you play, but suggest what player you should play at a given moment given your skill, your teammates skills, the map, and your team composition.

It’s said the in-game app should be available soon, and is being created through the use of software platform Overwolf that allows developers to create extensions for video games.

An app like this could also be implemented into the Overwatch League for some interesting uses, whether it be recruiting new members to a team based on their hero skills or practicing against specific AI teams to make sure you are prepared against any enemy strategy. It was even noticed by Blizzard itself, as company Social Media Manager Griffin Bennett, or u/Blizz_Griffin on Reddit, was impressed with the project, commenting on the Reddit post “This is very cool stuff. Well done!”

The site currently has 250,000 usernames and growing, so make sure to check in on your stats and see which heroes you are best at. For more info on the project as it progresses, you can join the OASIS Overwatch Discord or donate to TheC0der’s Patreon to get updates as well.