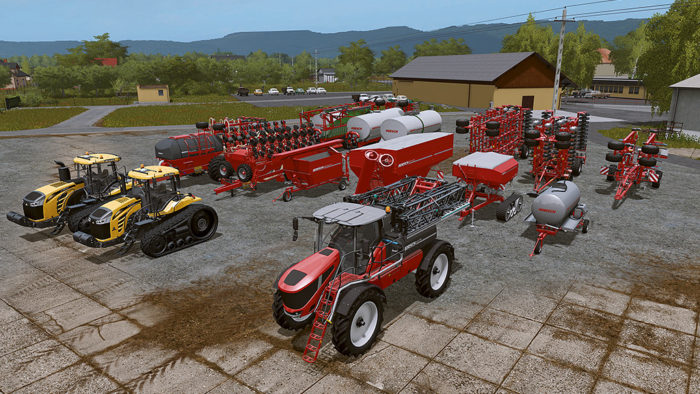 This interesting mod completely recreates the environment of Farming Simulator 2009 for the 2017 version. The grounds, buildings, and environment are similar to that of 09 while all the crops and animals are from 17.

There’s tons to see and do with this one, with plenty of road traffic, missions, gold nuggets to discover, and more. If you’re looking for a blast from the past, this one’s for you.

The Horsch AgroVation mod really leans into the whole simulator aspect of Farming Simulator. The mod adds in actual farming vehicles from Horsch, a huge farming machine manufacturer, and lets you play around with them. You’ll be taken to an environment in the Czech Republic, inspired by Horsch’s own AgroVation sites.

There you can play around with the manufacturer’s wide range of machines, including one-off productions and prototypes that were never released. If you’re a farming fan, this one is a must.

Farming during the day is all well and good, but once nighttime rolls around you might want to get a bit of work done still. The Flood Light Trailer mod is absolutely essential for anyone that ventures out in the night, as it can be used to illuminate various areas around your farm.

The lights also have a fairly long reach, so you won’t need to place a ton of them to get the job done.

The Old Stream mod is perfect for anyone looking for a little more room to let their farm and creativity expand. The mode basically expands the entire area for your farm, with lots of forested areas for a little variation.

Bigger doesn’t always mean better, but in the case of Farming Simulator it really does. More forest fields and a larger area means you can do even more with your farm.

Upping the realism in any kind of simulator is an appealing idea, especially in one as grounded as Farming Simulator. The Ground Response mod allows you to do just that, significantly boosting the way your tires interact with the world.

Tires will sink into the soil depending on the weather, like if it’s raining, making your job all the harder. Additionally, depending on the type of soil you’re on the tires will react differently, like being on rough ground versus slick and wet ground. A mod like this can help make Farming Simulator that much more immersive, if that’s what you’re looking for.

While Farming Simulator is, of course, focused almost entirely on farming and harvesting crops among other things, there may be times where you just want to kick back and relax. In those cases, that exactly what mods like Lizard Road Rage are for.

The mod gives you a sports car to drive around with a top speed of 155 kph. In between bouts of farming, it might be nice to just kick back and take a drive.

Tractors are your bread and butter in Farming Simulator 17, and by far they’re the piece of machinery that you’re going to use the most. As such, having a good tractor is absolutely essential and the Claas Axion 800 mod can provide you with some really good ones.

There’s three different models available, all based on the real world models of Claas Axion tractors from Renault. It also just so happens that these are some of the strongest tractors in the game, with the 850 model sporting 230-horse power.

Taking care of your livestock , like cows and sheep, is also a big part of your duties in Farming Simulator. Anything that can help make that easier is much appreciated. The Mixing Station GTXM mod lets you load up grass and straw, or other materials, up to 1500 liters per hour. It then produces fodder for your livestock.

The real use of this mod, however, lies in just how compact it is. The mixing station takes up very little room, leaving you more options for constructing other building or fields. Normally you’d need to construct a sizable plant to produce fodder, so having a smaller option is absolutely welcome.