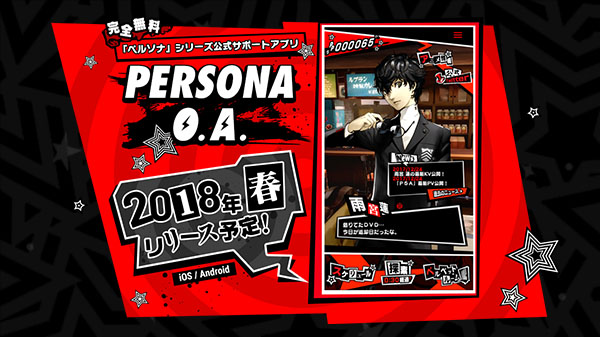 Fans of the Persona series in Japan will soon be getting an official companion app that comes with much more than just information — it’s also got a special “exploration” game and more, making it an interesting spin on the typical “companion” apps that come out so often and offer a barebones experience. It’s called Persona O.A., and it’ll be packed with some pretty cool features.

In addition to gleaning information about Persona in general from the app, you’ll be able to explore the Memento palace from Persona 5, earn Persona Points, and travel through the dungeon with your favorite characters and Persona summons. There are more to purchase, even, via the Velvet Room.

You can rack up Persona Points with QR codes and other special codes that let you nab web downloads, gifts, and other items in-game. If that’s not enough for you, there are also “conversation events” that you can navigate where you can check out all-new dialogue written for certain characters.

There’s a lot more to interact with in the app than just information and facts, so it seems more like a full-fledged game and whatnot than typical companion apps. Fans in Japan are currently able to pre-register for the app right now via Twitter, Line, or email, with a spring release window. There’s no word on a western release just yet, but hopefully that’s coming down the line.