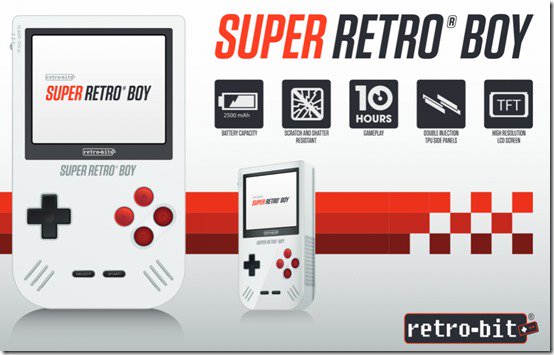 Retro-Bit has put the kibosh on its awesome-looking Super Retro Boy, a device that was created to play Game Boy, Game Boy Color, and Game Boy Advance games on the go. It was originally targeting a release date back in Aug. 2017, but unfortunately it obviously missed that release date and has now been put on hold, in response to some new trademarks that Nintendo has applied to renew that puts the Super Retro Boy in some rather risky legal waters.

The safe thing here to do is for Retro-Bit to avoid selling its system thanks to these trademarks, and as such the company is looking to avoid any potential legal ramifications. The system has been shelved in its entirety, and instead Retro-Bit will be working on bringing out its Super Retro Cade system instead.

There’s no word yet on how or when we might be able to see the Super Retro Boy out on the market in the future, but it was going to be a pretty awesome little powerhouse for portable Game Boy titles. At $79.99 it would have made a hefty portable cartridge-based handheld with a 10-hour battery life. The jury’s still out on whether it will come to fruition, but hopefully it can eventually. There’s a lot of void to fill for the Switch when it comes to older titles with the lack of the Virtual Console at present, and who doesn’t want to play their old Game Boy games again on the go, after all?