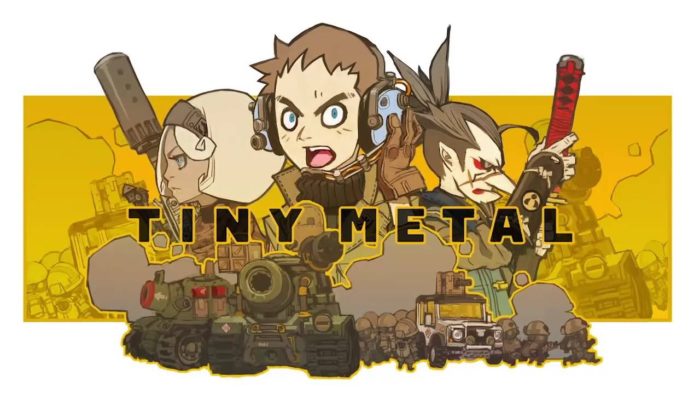 It’s been a good while since we’ve had a traditional turn-based strategy war game like Advance Wars, the Intelligent Systems series that was last seen on the DS family of consoles. Since that studio has been all about the fantasy world Fire Emblem lately, little known Japanese team Area 35 is here to fill the void with Tiny Metal, and for the most part they pull it off rather well.

50 years after a Great War ravaged the lands, the people of Artemisia continue to defend their borders and pray for peace against the dangerous nation of Zipang. As the game starts, the King of Artemisia has been supposedly killed, leaving you as Lt. Nathan Gries with plenty of questions and a quest to push back against another potential invasion.

A word of warning, there’s a considerable amount of dialogue in Tiny Metal. That’s not necessarily a complaint, there’s a constant effort to expand the lore of this world in-between all the action instead of just leaving you to figure it out for yourself. Having said that, Area 35 has included the option of fast forwarding, so those of you who want to skip ahead to the combat side of things during the campaign are more than welcome to. It’s worth keeping an eye on the story as it progresses to understand this intriguing world, but it doesn’t do itself many favors during the opening levels by heaping a lot of text in front of you.

But let’s be honest, we’re all here for the combat, so does Tiny Metal hold up? Thankfully, yes it does. For the uninitiated, you’re tasked with directing your troops per turn across a grid-based field to defeat the enemy or complete predetermined objectives. To explain it simply, combat plays out in a rock, paper, scissors kind of fashion, where certain troops are stronger against other types and vice versa along with some unique abilities to make up for any shortcomings. For example, your basic foot soldier is the weakest against most other types but makes up for it with the ability to capture buildings and are the cheapest to produce. Comparatively, Metals (AKA tanks) are strongest against most other vehicle types but have lower mobility and vision on the field.

For those who have played any of the previous Advance Wars games, everything here is rather familiar. But credit where it’s due, there are some unique updates to the formula that make Tiny Metal stand out a bit. Case in point, you can choose to lock on to a target with one unit before using an option called focus fire with another unit on the field nearby, allowing both units to attack simultaneously to inflict a greater amount of damage and perhaps avoiding a counterattack in the process. Hero units can also be called upon during play and can continually improve over time to inflict more damage.

Everything else is as you would expect, such as capturing buildings to earn credit towards purchasing new troops during battle, and flanking or hiding in higher terrain or trees to either cause greater amounts of damage or to reduce incoming fire. It might not be an evolutionary leap for the genre, but Tiny Metal does a solid job of representing a colorful war. The action plays out a brisk pace at times and some battlefields can be rather large, with decent variety of troop types for any kind of strategy you need.

The campaign will keep you occupied for a few hours, but if you want the most out of your investment you’ll want to take a closer look at skirmish mode. Here, the shackles are thrown off and you’re given a number of different scenarios to overcome with variances in battlefield size, enemy team numbers, and difficulty settings. There are 56 scenarios all up and most will provide a healthy challenge for even the most hardened strategy veterans, more so than the campaign. Having four teams with hundreds of troops on a massive field of play shows the true potential of the game and will keep you on your toes for quite a while, and luckily you can save and quit at any time so no need to worry about how long each battle might take.

Tiny Metal’s presentation is as solid as its action, though again it doesn’t really break new ground. Troops are decently detailed, colors pop to make it easy to see everything clearly on the field of play. Strangely enough, all the campaign dialogue is in Japanese until you actually get into the action, where suddenly everything is in English with plenty of ‘yay explosions’ and ‘hoorah’ battle cries, but that’s less a gripe and more a curious design decision.

The one thing that really holds Tiny Metal back from being a must-play title, a really strange decision really, is the lack of multiplayer at launch. There’s the promise of a patch that will fix that glaring empty gap on the main menu hopefully not long after launch, but it’s rather disappointing that it isn’t here in some form from the get-go. Area 35 had a tough time getting Tiny Metal off the ground after a failed Kickstarter campaign some time ago, but even with extra funding from various other investors perhaps the team found its release schedule a little too tight. Hopefully once the patch is in play everything plays out smoothly, but only time will tell.

Tiny Metal is an admirable return to the traditional turn-based strategy genre. There’s enough of a challenge both in the campaign and skirmish mode to keep players happy for a good while, but the lack of any sort of multiplayer at launch hurts its overall score. Fans of the Advance Wars series looking to reminisce on the good old days will get the most out of the experience, but if you’re new to the genre or sitting on the fence, you might want to wait until all of the content is properly patched in before paying up.