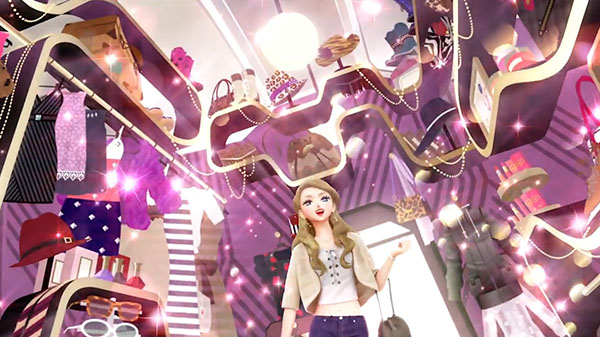 In my first few hours, it quickly became clear to me that I could play Style Savvy: Styling Star as a game about preying on the consumerist nature of unsuspecting young virtual men and women with questionable taste in clothing and fashion. What should’ve been a carefree romp through a thin story about a girl inheriting a boutique quickly transformed into an experience where I was visibly cackling over scamming my customers into buying the most expensive and hideous pieces of clothing I could find that matched their style parameters.

One of the biggest delights of having a 3DS is being secure in the knowledge that Nintendo is a publisher that specializes in a wide variety of games. You don’t always have to play the latest Mario or Zelda game, sometimes you can take a nice breather with a more lighthearted title as well. And that’s where Styling Star comes in.

Style Savvy (known as New Style Boutique outside of the US) is a series that’s been around for a long time. Styling Star is the latest iteration in this fashionista series, and while it might not have a very wide target demographic or audience, it does a decent job with what it sets out to do. As mentioned before, there’s no real story to speak of. The game starts off as a young woman serving as the player avatar arrives in a new city and meets her rather sleazy and sloppy looking uncle Tim. Shortly after her arrival, Tim drops a bomb saying that he’s passing his failing fashion boutique on to her, and he’s going off on a journey of self-discovery. Convenient, but a nice springboard for your character’s eventual world domination via bad fashion decisions.

At first, running the boutique feels simple. Each day, a handful of customers will enter the shop and let you know what they’re looking for. It could be anything from a “red skirt” to a “simple top.” Style Savvy: Styling Star provides a rather nifty search function to let you sift through your stock with appropriate filters to see if you have any items that match the customer’s requirements. By fulfilling their requirements, the customers will purchase the recommended items, giving you more funds to play around with. After a day or two of simple requests, Styling Star gets considerably more complex with its orders.

Because your boutique doesn’t have a magical wardrobe filled with infinite amounts of clothing, you will eventually have to make your way to the Exhibition Hall, which is where you can purchase more stock from a variety of different brands. Basic-U serves up plain clothing, Stage Dive is like the Style Savvy equivalent of Hot Topic, and AZ-US is where the classiest women go for their high-end haute couture fashion clothing. Tim Gunn would be proud.

In the event that your customer asks for a piece of clothing that you don’t have in stock at the boutique, you can always let them know that you’ll stock up before fulfilling their order. At first, this seemed like a bit of a cop out, as you could quickly leave the shop, buy everything you need from the Exhibition Hall, then come back to finish the request. But each time you travel to a new location, time passes, and the customer might not be there when you return. Waste enough time traveling back and forth between the Exhibition Hall and the boutique, and it’ll quickly become nighttime, and you’ll have to wait for the next day.

There’s also a bit of a risk-reward system in how you can respond to your customers. Whenever you pick an item for them, you have the option of either letting them know politely to “Take a look,” or you could get a little more aggressive and shout “Try it on!” Telling a customer to take a look at an item is a safer option, as you’ll often get a second chance at picking out another item if you made the wrong choice before. But telling them to try something on could backfire on you if they don’t like your choice, and they’ll most likely leave without buying anything. If you get it right, however, your confidence could inspire the customer to spend even more money on other items before departing. And this is where Style Savvy gets a little more interesting.

As the game progresses, orders become more demanding to the point where customers will begin to ask you to plan out entire outfits for them from head to toe. They’ll have specific requirements, of course, and you’ll need to make sure to ready an ensemble that fits the look they’re going for. For instance, a customer might want an entire outfit that gives a lively vibe. In this case, you’ll probably want to kit them out with items from a clothing brand that’s associated with liveliness. The problem is, within that selection of clothing, there are so many different combinations of items that can clash with each other because of color and style.

One of my personal highlights in Style Savvy: Styling Star came from picking out lively clothing items, and telling my customer to try out a garish looking bright green outer clashed with a bright blue shirt, red shorts, and knee-high socks worn with high heels. It was a fashion disaster, but hey, it fit perfectly with the theme that the customer wanted. I told her to “try it on!” and off she went. The results? She was absolutely enamored with the outcome, with nary a complaint or remark about sporty socks being worn with fancy heels. As fun as it is to coordinate genuinely fashionable outfits in Styling Star, it’s just as fun to create color-clashing disasters and watching your customers lap it up.

Each customer also has a set budget when they enter your boutique, and Styling Star quickly became a meta game of trying to find the most expensive piece of clothing that falls under their budget so that I could get a bigger cut of the profits. Later on, the creativity aspect really opens up as you unlock the Beautician and Salon, allowing you to get into different hairstyles and nail polish designs. I wish these played a much bigger part in the game, not just to expand my options of creating a fashion monster, but because we all know that fashion goes far beyond just the clothes that you wear.

Outside of picking out clothing for your customers, Style Savvy: Styling Star offers a fair bit of customization elsewhere, too. You’re free to redesign the exterior and interior of your boutique, along with the furniture in your character’s own home. As always, you can also buy new clothing for your own character to wear to lend her a more personal touch.

To my surprise, Styling Star charmed me a lot more than I initially expected. Though most of the characters in the game felt rather one-dimensional and bland, their in-game animations were always fluid and distinct, and matched their personalities. The game continues to entertain and keep you engaged with its poppish and upbeat soundtrack, along with its colorful aesthetics. While I really couldn’t recommend this game to anyone who’s not already utterly obsessed with women’s fashion and the idea of dressing people up however you want, Style Savvy: Styling Star is still a well-made game that will appeal to a younger audience, as well as folks looking for a title that will make use of their fashion sense and tastes. It’s far too easy to game the system by giving customers blatantly horrendous clothing, but it’s still a neat little title that will give you a few laughs, if nothing else.