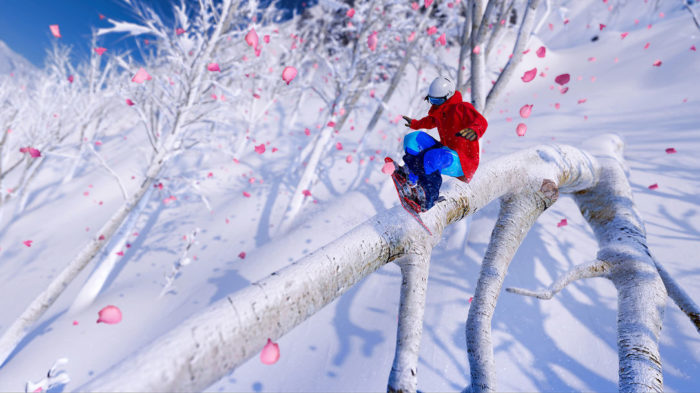 Steep: Road to the Olympics on PlayStation 4

The 2018 Winter Olympics is almost upon us and Steep, the winter sports game from Ubisoft released last year, has adopted PyeongChang 2018 into a DLC. We reviewed Steep last year, and we highly recommend giving that a read before continuing if you haven’t already played Steep. Unlike other winter sports and snowboarding games that have released over the years such as SSX, Steep plays quite differently. It’s significantly more realistic (although still not that realistic), technical, and unforgiving. It’s not that it’s difficult, it’s just that you can’t approach Steep the same way you would other similar extreme sports games. With that in mind, let’s move onto Steep: Road to the Olympics.

Road to the Olympics adds a stand alone story that follows an olympic snowboarders’ journey from a hopeful participant, to the first person to ever claim gold in three distinctly different snowboarding events: Half-Pipe, Big Air, and Slopestyle. It (mercifully) doesn’t beat you over the head with an in-depth storyline and instead opts for a documentary approach of sorts. In-between events, you’ll get interview snippets from world famous Winter Olympic athletes. It’s a neat touch that I at least found interesting as a snowboarder myself, and acts as an appropriate way to fill out the story a bit in lieu of a heavy plot.

A lot of the campaign will have you practicing instead of competing in actual real events. At first, I found it cumbersome, and yeah it is a little annoying. Steep is a game that takes itself very seriously after all. However, after completing the story (which should take most people about three to five hours I’d wager), the practice runs made a lot more sense. Those real-life snowboarders spoke about the importance of practice runs and familiarizing yourself with the course so you can have what you’re planning to do mapped out before the one that really counts, the Olympics. And when eventually I got to that point, and I had ran that Slopestyle course a few times already, I knew exactly what path I wanted to take to get the highest score possible. So in a weird way, those training runs added to the climatic moment of Road of the Olympics. It made it more authentic, as I envisioned my character psyching himself in a way that I imagine professionals in real-life do: “You’ve done this before, just play your game.” blah blah pep-talk stuff. It all fits with Steep’s style of “realism” and respecting the art of the sport instead of insane silly fun. Whether that’s a good thing or not you’ve likely already determined by now if you played the base game and are checking out this review to see if Road to the Olympics is worth a return.

Of the three events you’ll be flipping between, Slopestyle is the most challenging and rewarding. The primary course that you’ll end up running when you reach the olympics is incredible. It has radically different branching paths that allow players to either go for a grind heavy approach, one that has more jumps, or a combination of the two. While doing crazy tricks from a ramp is flashier, I enjoyed trying to master the grind. It’s a lot more difficult than in other snowboarding games, and is appropriately rewarding score wise if you can chain tricks together.

The other two events, Big Air and Half-Pipe are fun, but quite easy. As long as you’ve played Steep already before diving into Road to the Olympics, you’ll have no problem effortlessly trashing your opponents. Don’t expect any real challenge with these throughout the campaign.

Finally, outside of the campaign, you’ll have access to brand new massifs throughout South Korea and Japan. This is where the traditional Steep gameplay returns. You’ll have the ability to explore these mountains, discover new drop zones and events, and repeat courses for high scores. The new areas are very pretty, and if you’re into the photo/video aspect of Steep that the developers embrace, you can certainly get some awesome shots.

What it comes down to is: Do you like Steep? If you haven’t played Steep and you’re intrigued by Road to the Olympics because you’re a fan of the winter games or whatever the case is, definitely read our review of the base game first. It’s not going to be for everyone. That said, if the answer to the above question is Yes, and you want more Steep, then Road to the Olympics is a worthwhile expansion if the hefty $30 price tag isn’t problem for you.