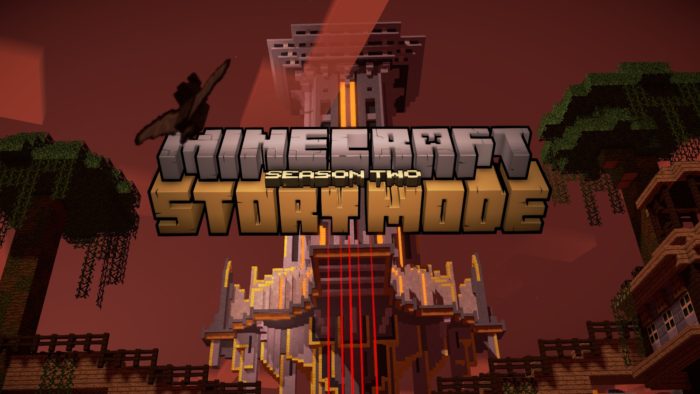 After a long, arduous journey, the second season of Minecraft: Story Mode finally comes to a close, and Jesse’s adventure reaches its climax and conclusion as well. If there’s one thing to be said about season 2, it’s that the story has been wonderfully consistent throughout, with every episode delivering some sort of new revelation or twist to keep things exciting. In episode 5, titled “Above and Beyond,” there are no more revelations to be had, but the game takes its time to tie up some loose ends and wrap things up neatly.

Coming back from the Heckmouth, Jesse discovers that the Admin has taken to ruling over Beacontown with an iron fist. Things look extremely grim at first, and the whole town turns into some sort of dystopian society where everyone is forced to appear happy or risk the Admin’s wrath. Despite being absent for basically the whole season, Axel and Olivia join Jesse’s crew for this finale, and the game does a great job of getting the entire gang back together for one last push against the all-powerful Admin.

While the build-up to the final confrontation is exciting and slightly panic-inducing, there are still speed bumps along the way, including an odd sequence with Lukas that felt too easily resolved with a few minor dialogue options, as well as some deus ex machina moments where characters that you thought you’d left behind for good decided to show up to save the day. These little moments do cheapen the experience a little, especially when you consider just how well-done the final showdown was in the end. The game’s awful ‘combat system’ does make a return here, but Telltale has thankfully shortened it a little to keep the action moving along.

Telltale was successful in presenting the Admin as this constant threat in each episode, allowing him to take on various guises and throw new surprises at the player. The final sequence against the Admin is cathartic and epic at the same time, reliving glorious highlights of previous episodes, while also throwing in a few new curveballs. As has been the case for the past four episodes, friendship and companionship continue to be at the center of Above and Beyond, and Minecraft: Story Mode is able to make its core message feel meaningful without getting overly cheesy or contrived. It’s a genuinely feel-good ending to a feel-good game as you reconnect with familiar faces in Beacontown, put old rivalries to rest, and finally get a say in deciding what Jesse should do next.

Above all, Minecraft: Story Mode also feels like a coming-of-age story for all of its characters. While the overall premise can feel a tad simple at times, it’s also a story that resonates with all of us as we learn that friends don’t have to be together all the time to make sure that bond doesn’t break. How you treat your friends and enemies throughout the whole adventure also plays a nice organic part in shaping Jesse’s personality and reflecting the tremendous growth of everyone else in the process. Radar, for instance, becomes a complete badass by the time he shows up in this episode, and I was given an option to promote him and give him more responsibility in Beacontown. The fact that you can choose to shelter him in the previous episodes and sort of prevent him from getting any meaningful growth also helped to make the story feel more unique and personal. After all, it was me who encouraged Radar to show a little more initiative each chance I got, and that led to him growing into a capable leader.

Minecraft: Story Mode has been such an enjoyable adventure to go through from start to finish, and even if Telltale chooses to leave this story as it is, I’d say they’ve done a pretty good job at constructing a simple but meaningful story with a satisfying close at the end.