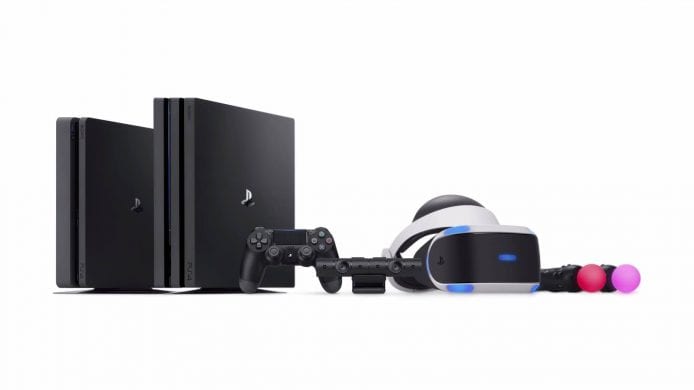 So the Nintendo Switch and the Xbox One aren’t going to cut it for you. You don’t really travel around much, nor do you care for the games on either system or the importance of power. That’s a fair call, we all have our likes and dislikes and there’s certainly nothing wrong with that. But if the decision is out of your hands and your parents aren’t 100% up to speed on what it all means, here’s a quick run down that will hopefully make things a little simpler.

The PlayStation 4 is currently the biggest selling console on the market. Yes the gap has shrunk a little thanks to some new competitors in the Nintendo Switch and the Xbox One X, but can either of those consoles play Horizon Zero Dawn? No need to answer that, instead lets focus on what’s important here and that’s the amount of top class exclusives you’ll only be able to find on Sony’s black box.

There are two key PS4 models, the vanilla PS4 Slim and the PS4 Pro. The Slim is your trusted entry level console in either 500GB or 1TB flavors. It’ll play everything you need, will work with every PS4 accessory and any hdmi based TV will play it. Keep in mind, the more hard drive space you have to begin with the better, but you can also use external hard drives if the need arises. Prices these days are rather competitive, and most bundles will feature a handful of games to go with the system, so keep a close eye on those catalogues and point out the bargains when the time is right.

As the bigger brother, however, the PS4 Pro supports 4K for certain games and ultimately plays everything else media wise at a higher resolution. In short, shiny stuff is better. It’s easy to find any games that feature PS4 Pro support, just look on the back of the cover for the logo near the bottom left. You’ll find that most new releases are PS4 pro upgraded, but otherwise every game and accessory will work as before. It’s more expensive, of course, but if your parents are willing, this is the better bet long term.

And then there’s the wonderful world of virtual reality. The PlayStation VR brings with it a host of other options and games your standard setup can’t, nor the competition unless you have a very powerful PC and either an HTC Vive or Oculus Rift. Even if you do, or are in the process of considering a VR unit of some sort, PlayStation VR is one of the cheapest options and provides some unique experiences, including Farpoint and the upcoming Bravo Team. The Elder Scrolls V: Skyrim and DOOM VFR (don’t ask what the F stands for, kids) are also on there, but maybe let the parents decide if they’re appropriate for your age.

The PS4 has a lot of positives going for it, but its biggest will be the community that plays it. If you want to convince your parents that the PS4 is the best buy, simply ask most of the other kinds in your street. No doubt most of them will be playing one in some form or another. You can also beg or promise to keep your room perfectly clean for the next 20 years, but let’s get real for a second. Video games are the dominant entertainment medium, it’ll only continue to grow as a platform for engaging narratives and high octane action for some time to come. Whether it’s a PS4 or another system, having one in the house can be an education for your elders as much as it may be for yourself, as long as you use it fairly and appropriately of course.

If you’ve read the two previous articles on both the Switch and the Xbox, you’ve no doubt made your ultimate choice on which console you’d like the most. Just remember, at the end of the day it’s all about being fair and kind to your parents. Don’t get angry at them if they can’t quite understand the differences between each system or what’s best, it’s not always easy to figure things out if you’re not familiar with them. Be patient, try to be as clear as possible as to what you hope for, and if all else fails keep on saving. Be good, and the rewards will arrive soon enough … just hopefully not in loot box form.