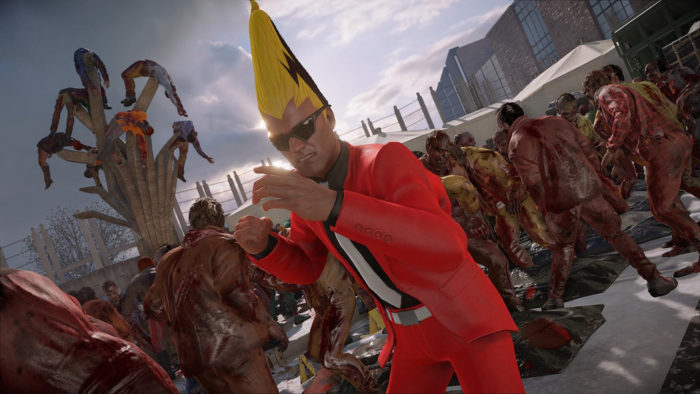 Though he skipped out on the PS4 last year, Frank West finally makes a return to Sony’s platform with the release of Dead Rising 4: Frank’s Big Package. And as you might have gleaned from the title, his package is indeed big and stuffed full of content for new players to sink their teeth into.

Dead Rising 4 doesn’t just bring the legendary photographer back into the fold; the game also takes us back to where it all started: the quaint little town of Willamette. Except instead of restricting the player to the mega shopping mall, the town itself is open for exploration, making this the largest Dead Rising game yet, with so much to see and do. The PS4 version of the base game remains largely the same, for better and for worse. The wacky combat and weapon combo systems are still in place here, and they’re the most robust they’ve ever been in the series. At the same time, many of the bugs and glitches that were present in the Xbox One version rear their ugly heads here as well.

Let’s talk about those first.

It’s no secret that Dead Rising 4 had fallen victim to several annoying bugs when it first released. You do generally expect to run into a few glitches here and there in a large open world game, but when you compound those with a stuttering frame rate when there are too many enemies onscreen, things become problematic. While playing on the PS4 Pro, I found that zombies and enemies would frequently clip into the floor and walls, making it impossible to hit them, but somehow they’d still be able to hit Frank. Every now and then, Frank would get stuck in the environment, unable to jump out to safety, and end up falling through the game world.

Hitbox detection continues to be wonky in the PS4 version as well. Though the floaty combat is something you’d typically expect from a Dead Rising game, it’s a lot more annoying when it’s paired up with the game’s other bugs and collision issues. Ranged attacks would hit you from a ridiculous distance even after you’ve sprinted away, enemy attacks would catch you even when it looks like their weapons aren’t anywhere near your body, and worst of all, it’s still difficult to maintain total control over Frank when trying to beat up a target with your fists. When you’re just mowing through hordes of zombies with an exo suit or a ridiculous AoE weapon, Dead Rising 4 is a really good time. The troubles only start to materialize when you’re facing off against the smarter humanoid enemies and Maniacs.

The worst part is, shooting still feels as awkward as it did on Xbox One. Aiming a gun and firing feels imprecise, and even though it’s hilarious to watch Frank pelt his enemies with dangerous swordfish, it can be annoying trying to line up a shot and feeling like the reticle is working against you.

As much fun as the core gameplay mechanics are, it’s still difficult to ignore the other technical issues that have been plaguing the game for a while now, and they’re still persistent on the PS4.

To make up for this, Capcom has included tons of other content in Frank’s Big Package aside from just the main campaign. All of the previously released DLC packs are here, including the zany zombie story DLC titled ‘Frank Rising.’ This new single-player chapter features Frank as an infected. As Frank discovers that he’s infected, he’s forced to go on the run while trying to find a cure for himself. The story is rather short, but it’s still packed with that tongue-in-cheek writing and humor that keeps the pacing up.

The Super Ultra Dead Rising 4 Mini Golf DLC is included here as well, and it actually proved to be a lot more fun than the game’s original multiplayer mode. In this Mini Golf DLC, up to four players are able to take part in a game of mini golf with a twist. For what seems like an awfully simple concept, the DLC is packed with customizable golf clubs, and various other challenges that you can take part in to try to raise your score. And, of course, there are zombies involved as well, so you’ll have to work around them while also trying to beat your online opponents in an epic golf bonanza.

The only downside is that the game doesn’t seem all that stable when playing online. During the few matches that I managed to get into over the past week, there would be cases of players dropping in and out of the game, and the golfing itself occasionally felt laggy. The upshot is that you can host a local game, so if you’ve got someone to play with you on the couch, the game mode comes into its own. It can be enjoyed alone as well, and it’s overall a really well-done mini golf game that you can sink some time into when you want a break from the campaign. It’s still no Terror Is Reality, but it gets the job done.

However, the biggest draw of Frank’s Big Package is definitely the brand new Capcom Heroes Mode. This is essentially the single-player story campaign, except you can now go through the story with Frank dressing up as numerous iconic Capcom characters, while also executing some of their special abilities to kill zombies. Characters include Sissel from Ghost Trick (a face we haven’t seen in years), Jill Valentine, Dante, several characters from Street Fighter, and more.

You’ll purchase the relevant outfits from vendors found throughout the game, and it can be a ton of fun to barrel through the streets of Willamette as a buffed up Ryu who just punches his way through everything. Ultimately, it doesn’t add that much value to the game itself if you’re not already invested in Capcom’s most popular franchises, but it’s a neat little diversion for when things get too stale.

Overall, Dead Rising 4: Frank’s Big Package gives you fantastic value for your money. There’s a lot of content and different modes to go through here. You’re getting a full-length story campaign, two multiplayer modes, a single-player story chapter, and so many outfits, weapons, and vehicles to tinker with in Willamette. And you’ve got the outrageous Capcom Heroes Mode stacked on top of that. Whether all of that can be considered quality content is a different question altogether. At the end of the day, I learned to accept all of Dead Rising 4’s blisteringly annoying bugs and weird hitboxes, and just tred to enjoy the game for what it was.

Dead Rising 4: Frank’s Big Package still comes with all the flaws and warts it had during its original release, but if you can look past that, and deal with some laggy multiplayer connection problems, there’s still a fun and varied story experience waiting for you here.