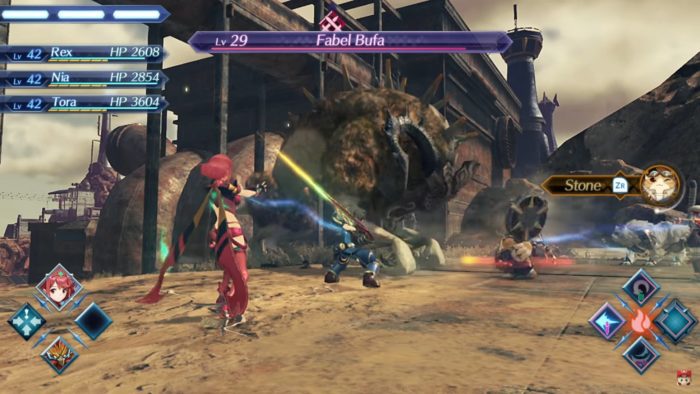 Today’s Xenoblade Chronicles 2-focused Nintendo Direct showed off a ton of new information for the exclusive RPG, which was touted as “the next big adventure on the Nintendo Switch system.”

The Direct began with what may have been the most important piece of information for some: Xenoblade Chronicles 2 can be played with either the English or Japanese voiceover. Those looking to play the game with the original Japanese voice cast will be able to download the free “Japanese Voiceover Option” DLC on day one.

These Japanese voices were on full display in the game’s new story trailer. This new trailer expands on what we already know, while also showing off some interesting scenes from the beginning of the game. It also shows off a few of the party members that will be traveling alongside Rex, including the cute nopon, Tora. The trailer does a great job of depicting the weight of the burden that Rex bares.

Following this, the Direct went on to explain some of the battle systems of Xenoblade Chronicles 2 in-depth. It reiterated much of what we already learned from September’s Nintendo Direct, such as the relationship between drivers and blades, with much further detail. Your party consists of three drivers who can equip three blades each. During battle, you can switch between blades on the fly. Different blades can be unlocked by finding core crystals.

Depending on which blade you have equipped, several of a drivers’ attributes will change, including stats and drive arts. Your arts are essentially actions on a cooldown that you can use on top of your standard auto attack. Each blade can equip three different arts, allowing the driver to use a maximum of nine arts. Pyra is a blade that can be used exclusively by Rex in addition to his other three blades, meaning that he has greater combat options than the other party members. On top of being able to topple your enemies, you can now use certain arts to launch them into the air and smash them for huge damage. While an enemy is launched, it will be unable to attack or defend.

The party gauge is back and works similarly to how it did in the first Xenoblade Chronicles. You can either spend it reviving party members, or save it up to perform a chain attack. The last combat information introduced were your special arts. When charged up, you can use attacks that are “so spectacular even your enemies will stop to watch.”

We also got some information in regards to character growth, which seems to be fairly similar for both blades and drivers. Every character has different skill/arts trees that will be very familiar to fans of the first game. Gain points through battle and spend them to increase certain stats and improve different arts. Heart to hearts also make a welcome return. Visiting certain places with different characters will trigger a scene between the two. Viewing these scenes will increase characters’ affection with one another, which will improve synergy in battle. Previously, heart to hearts could only be experienced by two party members at a time, but it seems to be expanded in Xenoblade Chronicles 2 where at least some can be experienced by the whole party. Exclusive to blades are aux cores and core chips. Having a blade use an aux core will raise different abilities, while using a core chip will have an affect on their weapons.

The Direct also uncovered some new information in regards to exploration, which will be much deeper than in the first Xenoblade Chronicles. The design of the envioronments, the nature and the enemies retain the level of quality that we’ve come to expect from the Xenoblade series. In this game, they’ve introduced a few new ways to explore that adds to the already excellent experience. Blades have different passive support abilities that can be used both in and out of battle. Some blades can increase the amount of item drops, while others can open up brand new paths on the overworld. Added to this, different weather statuses can have an affect on the layout of the land, opening up new paths. Experimenting with this is vital to obtaining rare treasure.

On the subject of treasure, the Direct made a point of explaining the trading posts and trade guild. Bundling up treasures into different sets and handing them in at a trading post can earn you different rewards. The trade guild is a shoppers gold mine offering “everything from musical instruments to toys, to books and more.” Here you can play an 8-bit game with Tora known as “Tiger! Tiger!”, where you can “customize a very special blade. Upon defeat, certain strong enemies will leave behind a tombstone. These tombstones will allow you to re-challenge those enemies, which will earn you some rewards.

Nintendo mentioned that we’ve “barely scratched the surface” with all of the current information that has been unveiled, showing that this really is going to be one huge game. Even for how big this game is going to be, there’s a way to get even more content out of this game with the newly revealed expansion pass. For those who are already dedicated to absorbing every bit of Xenoblade Chronicles 2 that they can get their hands on, the expansion pass can be pre-purchased from the Nintendo eShop, or pre-ordered from select retailers for $29.99. Below are the details of the expansion pass, provided by Nintendo.

Before the end of the Direct, one more cool piece of information was announced for a different game. On Nov. 9, a new side quest is coming to The Legend of Zelda: Breath of the Wild for Nintendo Switch and Wii U. Clearing this side quest will net you a Xenoblade Chronicles 2-themed Rex costume for Link. This date isn’t too far off, and will hopefully get you into the Xenoblade mood, prior to its release.

The release of Xenoblade Chronicles 2 really isn’t too far off either. The Direct ended by reiterating that on Dec. 1 you can pick up the standard edition of the game for $59.99. Or you can splurge on the special edition, which comes with a “a beautifully illustrated hardbound art book filled with 220 pages of concept designs and artwork of the characters, landscapes and objects from the game, a sound-selection CD of many of the game’s memorable music tracks, and a special metal case containing the Xenoblade Chronicles 2 game card” for $99.99. As well as this, a special pro controller featuring a Xenoblade Chronicles 2 design will be available for $74.99. Not long to go now.