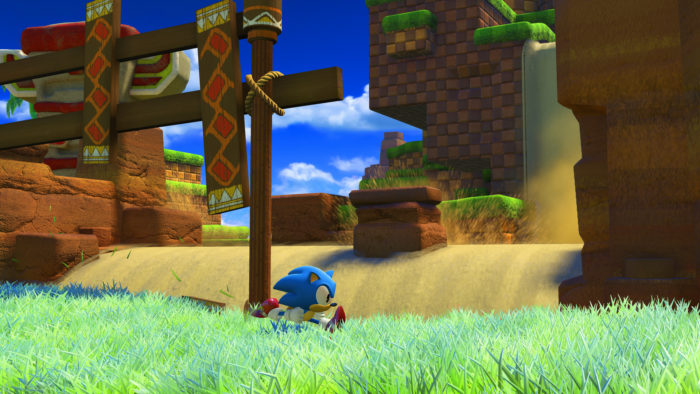 There may not be another series of games that sees as many peaks and troughs as Sonic the Hedgehog. For every 3 & Knuckles, CD, or Generations that meets or exceeds our expectations, there is a 3D Blast, R, or ’06 that totally lets us down. This year, we’ve seen two Sonic titles release echoing this rollercoaster pattern of quality: Mania, and Forces. The former released to critical acclaim, while the latter received a more lukewarm response.

Over the years, the Sonic Team has had varying success trying to implement gimmicks in their games. Putting guns in Shadow the Hedgehog, for example, was a bold move. Certainly, it’s been interesting to see how many risks SEGA is willing to be with one of its most popular IPs. Surprisingly, though, neither title released this year was particularly risky. Mania was a literal recreation of the Genesis-era Sonic games that were loved by the people who played them back in the day. Forces, too, while it does incorporate the hero creation mode, was also a pretty safe play, reusing the same gameplay style seen in Generations – one of the more highly regarded modern Sonic titles. In fact, starting with 2008’s Sonic Unleashed, this modern gameplay, dubbed the ‘boost-formula,’ has been the longest running style to date. 2013’s Sonic Lost World attempted to break from the boost-formula but was met with mixed reception. Forces, reverting back to this style, seemed like a surefire way to recapture the magic of Generations. Unfortunately, though, it doesn’t meet the same level of quality as its predecessors. The control of Sonic feels off, leading to many unwarranted deaths, and the level design is rather dull, filled with automated segments that aren’t much fun to play. In Forces, the limitations of this gameplay style have been found out.

So where does SEGA take the franchise from here? The consecutive releases of Mania and Forces have somewhat left an indication of how SEGA was going to move forward with the series. It is (hopefully) anticipated that Sonic Mania developers PagodaWest Games and Headcannon would work on 2D games, while Sonic Team oversaw the 3D side. In doing so, SEGA would be pleasing fans of both 2D and 3D Sonic Styles. Had Forces matched the quality of Generations, we may have seen more boost-formula games, but this may no longer be the case. At this point, fans may have lost faith in Sonic Team. If they want to keep developing 3D Sonic games, something has to change.

It doesn’t seem to be in SEGA’s best interest to reduce the franchise to 2D only. Even if there’s a case to be made that the Blue Blur’s best outings have been in 2D, removing the series from the 3D would symbolize an end to AAA Sonic. He is, after all, SEGA’s most recognizable character, and surely the publisher would want him to be up there with other industry icons, such as Mario, and Master Chief. Classic SEGA franchises like Altered Beast, Ecco the Dolphin and Golden Axe only received a single 3D title, while many others didn’t see any, which ultimately saw them fade from relevance. Sonic’s perseverance in 3D has helped keep the franchise relevant.

Whether this makes you happy or sad, it looks like if Sonic Adventure 3 were ever to come, it would be now. Mania was a nostalgia play for Genesis fans, and that worked tremendously well. Gameplay-wise, Adventure 3 has basically already been done. Although stripping the ‘Adventure’ moniker, Sonic the Hedgehog 2006 was essentially Sonic Adventure 3. It featured multiple interwoven stories, different characters with their own individual gameplay styles and a serious narrative that feels like it came straight out of an RPG. The problem with Sonic the Hedgehog 2006 is that it is an unfinished and buggy mess. Despite these problems, a set of fans will still defend the game because it is stylistically similar to the Adventure games. If SEGA were to take a stab at making a game like this again, it would make the fans happiest if they simply called the game ‘Sonic Adventure 3.’

In terms of their next 2D game, surely we’ll see SEGA return to the Mania concept once again with a sequel title? The idea of remixing old stages, while incorporating new ones a blueprint that still has plenty of potential. Sonic Mania 2 practically codes itself: remix some more classic stages, throwing in fan-made ones, add some funky chiptune beats, and away you go. With respect to 3D, though, SEGA needs to carefully consider which direction they take the 3D games. Colors and Generations showed an upward trend in quality but has unfortunately been dropped with the latest releases: Lost World, Forces. Not to mention, let’s not forget about the train wreck that was Sonic Boom: Rise of Lyric. To be fair, though, at least they were trying something new. Forces’ rehash of gameplay we’ve seen in three other games was lazy by comparison.

Expect SEGA to continue developing games that pander to the Sonic audience. Just as Mania played on nostalgia with its pixel art and remixed stages, and Forces was seemingly designed to hook in the OC universe crowd with its hero creator mode, you wouldn’t bet against the reemergence of Sonic Adventure. At this point, even just the name itself is coveted enough by fans to ensure decent sales. The hope, of course, is that there’s real substance to its gameplay; once again taking control of Tails, Knuckles and a few of Sonic’s other friends across different modes that bring fresh innovation, not just retreading the same ground we’ve seen before. There comes a point when fans run out of appreciation for nostalgia, and even hordes of OC characters won’t be able to support the weight of the franchise. Whatever SEGA do next in the 3D space, it has to be better than Forces. Fool me once, shame on you. Fool me four times, that’s no goooood.