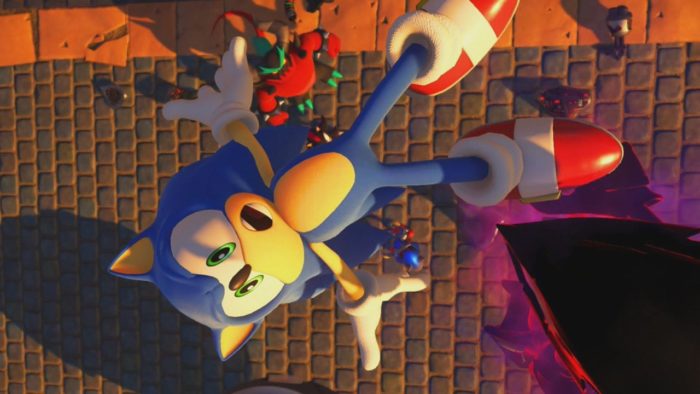 Sonic Unleashed introduced the modern Sonic formula. Sonic Generations did a great job of integrating the classic Sonic gameplay alongside the modern style. Sonic Lost World threw all of that out of the window and tried its own thing, for better or worse. Sonic Forces mostly returns to the style of Generations, allowing us to play as both modern and classic Sonic, while also introducing a new character, the avatar. Introduced in Sonic Unleashed, the ‘boost-formula’ gameplay, as some like to call it, was improved from game to game, so it would have been safe to assume that Forces would follow the same upward trend. Oh how naive we were.

To be fair, some parts of Forces show that Sonic Team was committed to innovating. There are some definite areas of improvement, and a couple glimpses of progress that aren’t fully realized. Firstly, it’s hard to fault this game’s graphics. Being the first Sonic game on the current generation of consoles (barring the retro-style Sonic Mania), it would be inexcusable for this game not be the best looking in the series. It isn’t just the extra power that improves the visuals, but also the art style. It’s clear to see that this game succeeded Sonic Lost World. Say what you will about that game, but it’s hard to argue that the art style wasn’t gorgeous. It used a lot of flat, vibrant colors that made it look much more cartoony than its predecessors. Sonic Forces seems to blend the art style from Lost World, and something more realistic like Unleashed. We’re left with a visual style that complements both the classic feel of Green Hill, as well as the gritty look of City (great name, by the way).

Sonic Forces has a slight glimpse of forward thinking level design. Overall, the level design isn’t a step in the right direction, but there are some small moments in Forces that are better than what we’ve seen before. For example, there is a single avatar stage where the camera is side on, but is at a slightly higher angle. In this section, you can move in a 3D space at your leisure – not just left, right, or forward as you normally would. Unfortunately, that’s it. It’s not even a particularly fun section, but it was at least a slight change to the gameplay that we’ve been used to for close to 10 years now.

Interestingly, Forces does incorporate a few ideas from Sonic Lost World. It reuses the Super Mario Galaxy-esque revolving platforms for a few sections, but does them better. In Forces, the only obstacles are on the platform itself, and there’s nothing to crash into at the end of the platform, which was the problem in Lost World. These parts of Sonic Forces are actually fun! Another element that Sonic Forces does better than past games are the quick-time events. The camera completely changes to something resembling an in-game cutscene, while you have to time a button press. Rather than seeing Sonic do a silly pose, we are treated to a custom scene for each quick-time event. It isn’t much, but it’s certainly an improvement.

The last improvement is a double-edged sword, as it’s also an example of how they messed up: the return of Sonic’s grand cast of characters. This is the first time we’ve seen proper integration of Sonic’s friends in a mainline Sonic game since Sonic the Hedgehog 2006. Some may consider this a bad thing, but a lot of people love the Sonic games for its cast of characters. There’s a reason why the Sonic Adventure games and Sonic comics are still so highly regarded among fans. However, this is where we get to where Sonic Forces messes up.

The integration of the characters was extremely poor. They’re just there. It tried to recapture the feeling of some earlier 3D Sonic games, but failed miserably. In Forces, all of their personalities have been stripped away. This haphazardness carries over to the overall story, as well. The story starts in the middle where Eggman has already taken over, the resistance has already been formed, and Infinite is there… Want more information? There are four prequel comics that you can find online. They are incredibly short, and still don’t explain much, but they’re there if you want them. A resistance against the Eggman empire is a great reason for the characters to come together, but they don’t even reserve any cutscenes for this.

Of course, story doesn’t always matter too much in a platformer. If the gameplay is good, the story won’t have too much impact on your enjoyment of the game.

So let’s talk about the gameplay. It’s janky. Not only is classic Sonic shoehorned into the story, he seems shoehorned into the game as a whole. These feelings come from the fact that his gameplay is just not as good as it was in Sonic Generations; he’s strangely heavy and slow. In Generations, classic Sonic was slower than modern Sonic, putting a greater emphasis on platforming and maneuverability, rather than the twitchy gameplay of modern Sonic. There was more opportunity to explore the more vertical levels, but there were still ways to speed through horizontally, like the 2D Sonic games of old. In Forces, you can’t really do either. You seem almost forced to take a specific path on your first go of a level. Some jumps feel impossible to make without the precise momentum, and require much more trial and error than they should. The simple act of jumping to a platform or dashing up a ramp isn’t as intuitive as it should be, due to the altered jump arc, or the level layout never putting you at the right momentum.

You’ll find the exact same problems in the 2D sections of the avatar’s stages. The jump arc just doesn’t work with the level design. It’s not a problem in most levels, but there are some levels that feel like they’ve been designed counter-intuitively to the avatar’s controls. Your jump arc is locked to your momentum, and is hard to alter mid-jump. Some later levels have continuous thin platforms and bottomless pits that have to be slowly traversed. Expect to under-jump and over-jump again and again. Bizarrely, some wispon power-ups give you a burst of speed upon landing, making it almost impossible to pass these sections. Thankfully, you have unlimited lives. The main difference in the avatar’s gameplay is the greater focus on combat, which might be the worst part. There aren’t many different enemy types, and those that there are will often just spawn in a line or a circle. All you have to do is press R2 to use your overpowered wispons to destroy them all at once. It’s pretty boring.

Modern Sonic’s gameplay remains relatively untouched, but just feels a bit more janky. The homing attack detection feels closer to Lost World than it does Generations, which isn’t a good thing. The removal of the drift mechanic also hurts modern Sonic’s gameplay, making those near-automated segments feel even more automatic. Automated segments in 3D Sonic games are one of their main complaints, and Forces is chock full of them. The very opening of the game has you running through Green Hill as modern Sonic for 20 seconds with very little control. It sets the precedent for the rest of the game. A little eye candy isn’t a bad thing, but too much of it just bogs the game down.

The length and replay value is also pretty lacking compared to past games. The game can be beaten in as little as two hours if you stick to the required stages, and that’s honestly the recommended way to play. Although Generations was short, it had six extra missions per level which changed the layout, and often allowed you to buddy up with one of Sonic’s friends. Completing these unlocked different artwork and music tracks. There’s only a few extra stages in Forces, none of which are particularly enjoyable. You can replay the levels to find the five red star rings, but there’s no real incentive to do so.

Sonic Forces is one step forward and five steps back. The few improvements only make the experience better in very minor ways. The instances in which it dropped the ball, particularly the controls and level design, affect your enjoyment of the game majorly. Sonic Forces isn’t a terrible game, but it’s worse than all of the previous boost-formula games for no real reason. They could have just completely copied the engine of Sonic Generations and it would have been better than what we ended up with. Sonic Forces could have been a great Sonic game, but the lack of polish leaves a lot to be desired.